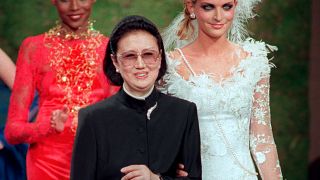 Japanese fashion designer Hanae Mori has died at her home in Tokyo aged 96.

Reputed for infusing Japanese elements inspired by the kimono, Mori designed costumes for hundreds of Japanese films, in the 1950s and 1960s, dressing star actresses like Mie Kitahara, Sayuri Yoshinaga and Shima Iwashita, in some of the most renowned cinematic pieces the era produced.

Empress Masako wore a Hanae Mori wedding gown adorned with rose-petal patterns when she married Emperor Naruhito, then the crown prince, in 1993.

Mori symbolized the rise of Japan as a modern, fashionable nation. She became a pioneer for Japanese women, one of a small number to head an international corporation in Japan’s still heavily male-dominated boadrooms.

Her umbrellas and scarves, often decked with colourful butterflies, were a status symbol with working women.

She built a $500 million fashion house that popularized East-West styles, with her first collection abroad - in New York in 1965 - celebrating the theme "East Meets West."

Her career took her from Tokyo to New York and Paris, where in 1977 her label became the first Asian fashion house to join the rarefied ranks of French haute couture.

Japanese fashion greats such as Issey Miyake, who died earlier this month, followed in her path.

In 2002, she was awarded the Legion of Honor, France’s most prestigious decoration, in the rank of officer.

She is survived by two sons, who have their own business, a daughter, seven grandchildren, and several great-grandchildren, the Hanae Mori office said. Her grandchildren Izumi Mori and Hikari Mori are fashion models.

Emerging Japanese designers ready to take over from Kenzo and Miyake

The "shocking" designs of Elsa Schiaparelli come to Paris