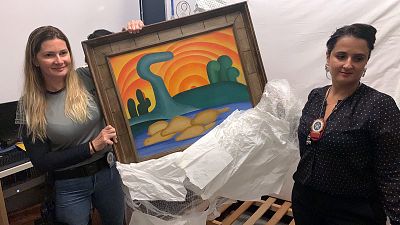 A stash of 10 stolen paintings was discovered yesterday (Wednesday 10 August) by Brazilian police.

The artworks were found under the bed of an alleged con artist involved in a multimillion pound criminal art and jewellery heist.

At the bottom of the pile was 'Sol Poente' - a painting of a brilliant-hued sunset, created in 1927 by one of Brazil's most celebrated artists, Tarsila do Amaral. It is valued at an estimated €55 million.

“Well, well, well...look what we have here!” said one female officer as they removed the iconic artwork from beneath the bed.

Police in Rio de Janeiro were seeking the arrest of six people accused of involvement in stealing 16 artworks, together valued at more than 700 million reais (€133 million).

The paintings were stolen from the 82-year-old widow of Jean Boghici, a renowned art collector and dealer who died at the age of 87-years old.

In total, four people have been arrested so far, including the victim’s own daughter whom is believed to have orchestrated the theft of the artworks.

In January 2020, the group of con artists approached the widow in the Copacabana neighbourhood and informed her that her daughter was sick and soon to die. The widow was tricked to make bank transfers totalling 5 million reais (€942,000) over the course of two weeks for supposed spiritual treatment.

Three of the artworks stolen from the widow's residence were recovered in an art gallery in Sao Paulo.

The gallery's owner told police he had purchased them directly from the widow's daughter, and sold two others to the Museum of Latin American Art in Buenos Aires.

Check out the video above to see the stunning moment the police discovered the paintings.