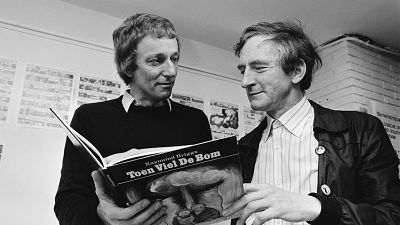 Author and illustrator Raymond Briggs, best known for the 1978 children’s picture book 'The Snowman', has died at the age of 88.

His family said in a statement through his publisher Penguin Random House that Briggs died on Tuesday morning.

"We know that Raymond's books were loved by and touched millions of people around the world, who will be sad to hear this news. Drawings from fans - especially children's drawings - inspired by his books were treasured by Raymond and pinned up on the wall of his studio.”

'The Snowman' has sold more than 5.5 million copies around the world.

Equal parts magic and melancholic, it tells the story of a boy, James, whose snowman comes to life at the stroke of midnight. On Christmas Day, the following morning, James wakes up to find that his snowman has melted, leaving him mourning the loss of his friend.

An animated version of 'The Snowman', created for Channel 4 in 1982, has become over the years a beloved festive staple in the UK and has been shown on Christmas every year since. Scored by Howard Blake, the wordless tale also featured the song ‘Walking in the Air’, performed by Peter Auty. The song was then covered three years later by Welsh chorister Aled Jones in a single which reached #5 in the charts in the UK.

Brigg's other works include beloved children’s books 'Father Christmas', 'When The Wind Blows' and 'Fungus The Bogeyman'.

“Raymond’s books are picture masterpieces that address some of the fundamental questions of what it is to be human, speaking to both adults and children with a remarkable economy of words and illustrations,” said Francesca Dow, managing director of Penguin Random House Children’s.

She added that Briggs was “unique” and “inspired generations of creators of picture books, graphic novels and animations”.

Briggs is survived by his step-children and step-grandchildren.