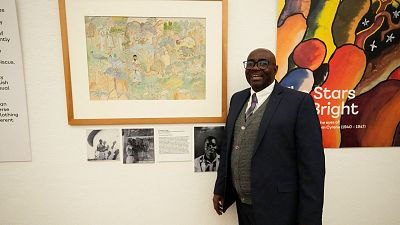 Gift Livingtsone Sango, 65, stands next to a painting by his father depicting Jesus as a Black man at the National Gallery of Zimbabwe   -   Copyright  AP Photo
By Theo Farrant  & AP  •  Updated: 10/08/2022

For the first time in 70 years, a collection of artworks discovered in the basement of a London church, have returned to their home country: Zimbabwe.

The school was the first to teach art to Black students in what was then white minority-ruled Rhodesia.

"This is a collection of lost Zimbabwean artworks from the 1940s from an Anglican Mission School in Cyrene, called the Cyrene Mission School," says Lisa Masterson, curator and director of art exhibition.

"It was opened and started by a visionary art teacher called Canon Ned Patterson. It is basically the first school in Zimbabwe to offer art as a compulsory subject to young Black students in the 1940s and Ned Patterson was a true believer that art could unite people. And that no matter what people saw in an artwork, it didn't matter what colour you were, or where you came from or what tribe you were from, art was a unifying factor."

How were the forgotten paintings rediscovered?

A collection of the artworks painted at Cyrene school between 1940 and 1947 was sent overseas to be shown in London, Paris and New York.

Many paintings were sold and helped to fund the school.

Later the paintings were stored in the basement of St. Michael's and All Angels Church in London and over time they were forgotten.

The artworks were rediscovered by a Zimbabwean who recognised the name Cyrene on the boxes when the church was being deconsecrated.

He brought the paintings to the attention of others who realised they'd stumbled across a treasure trove of art and history.

"The Stars are Bright" exhibition has returned the paintings to the country, where many Zimbabweans will see them for the first time.

Photographs of some of the artists as young boys are displayed alongside the paintings.

For the first time in his life, Gift Livingstone Sango saw a painting by his father depicting Jesus as a Black man.

A photograph of Sango's father, Livingstone, as a young boy hangs next to the painting.

"It's a completion of my history as a Damasane to know the stories that my grandfather would tell through painting, through his artworks," says Nomashekawazi Damasane, granddaughter of one of the artists.

"It's also very important for me as an artist, as a creative, to know that our artwork is coming back home, because it allows for people to know that it did not just start now. People started doing art way back. So it's really important and I'm very pleased and grateful that this artwork is coming back where it belongs, to the people that it belongs to, and us the third and fourth generation of these amazing artists can actually see what our forefathers did before we were born," she added.

The exhibition comes amid growing calls for the repatriation of African art to the continent.

The organisers say they are negotiating with the Curtain Foundation, the owners of the collection, for the permanent repatriation of the works.

The Stars are Bright exhibition at the National Gallery in Harare will currently be on until late October.

The churches empowering communities to beat climate change in Zimbabwe