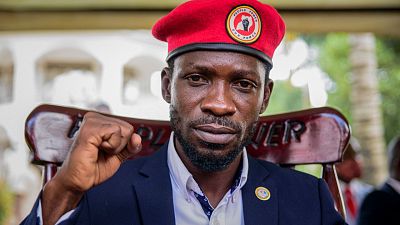 Wine, whose real name is Robert Kyagulanyi Ssentamu, was the main challenger in the 2021 vote against long-time leader Yoweri Museveni - who won the election with 58 percent of the ballots cast.

The music legend, who was detained and harassed multiple times ahead of the vote, rejected the outcome of the election as fraudulent, claiming there was video evidence of the military stuffing ballot boxes and chasing voters away from polling stations.

While he failed to take office, Wine says the film is "an overwhelming success."

The observational documentary from directors Christopher Sharp and Moses Bwayo follows Bobi Wine as he rises from the ghetto slums of Kampala to become one of the country’s most loved superstars.

Wine uses his music for activism, then becomes an Independent Member of Parliament to stand to defend the rights of his people, 'the ghetto people'. He seeks to end Uganda's brutal dictatorship.

The film features unbelievable footage of presidential opposition candidates being taken from their homes, and of Wine being arrested and taken into custody in the middle of a media interview.

Speaking at the Venice International Film Festival, Wine said he hoped the film "causes the international political community to reflect on what they are sponsoring."

"I hope then they get to realise what exactly they are paying for, what they're sponsoring: genocide, murder, oppression, dictatorship," he said.

Where can you watch 'Bobi Wine: Ghetto President'?

The documentary has been snatched up by National Geographic after its world premiere at Venice.

It also made its US premiere on Sunday (4 September) at Telluride film festival, where Bobi Wine also gave a live musical performance.

National Geographic plans to tour the film across festivals throughout the rest of the year and release it in cinemas in 2023.