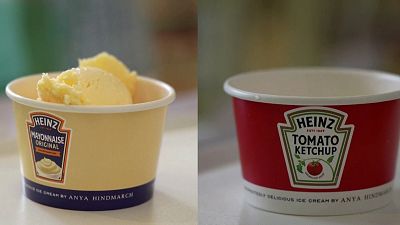 Ice cream makers in Italy are celebrating a large increase in demand as tourists flock back to the country for the warm summer months.

Artisanal gelato producers have had a very hard time over the last two years - with production and consumption down by almost 20% due to lockdowns and restrictions.

This year, however, and specifically in the last few months, there has been a significant increase in gelato-making and eating.

Parlours everywhere are back to being full, and tourists and locals wander the streets delighted to be able to cool down a little.

A good time for gelato

In Pisa, the Tuscan coastal city best known for its leaning tower, the temperatures are soaring and while tourists take up the traditional photographic pose of pretending to hold up the tower, they also savour their ice cream.

At the nationally renowned Gelateria De' Coltelli, gelato master Gianfrancesco Cutelli is busy trying to keep up with the hordes who want to taste his ice cream and granita.

"After this long period of the pandemic we have started up again thanks to the heatwave, work is going very well. We had and are having some problems finding the raw materials which have had a huge rise in costs, but consumption is up, lots of clients, many tourists, so we are very pleased," he says.

His flavours range from the traditional and simple ones like chocolate to more complex and exotic recipes like almond with candied lemon peel and saffron.

The art and traditional craft of Italian artisan gelato making is taught at the Carpigiani Gelato University in Bologna.

Students from around the world gather to learn about the history, science and art of making gelato.

Some students at the university already work in the industry but have decided to perfect their skills with the master gelato makers, including Alessandro Masia.

Masia believes the key to making an excellent gelato is knowing the ingredients and showing creativity in pairing different flavours.

"Making experiments is one of the key points of our job. So, we have to be curious. We know how to balance a recipe, we know how to combine together the ingredients," says Masia.

The university is also home to a gelato museum, featuring historic pictures and instruments dating back to the origins of Italy's beloved delicacy.

In the UK, Brits have been celebrating the hot weather with much wackier flavours of ice cream.

At the Anya Hindmarch Village in Belgravia, London, a pop-up gelateria is offering customers the chance to sample a range of weird and wonderful ice cream flavours, including Heinz baked beans, PG Tips, Worcestershire sauce and mayonnaise.

"This is the Ice Cream Project created by Anya Hindmarch. This is all about elevating the everyday flavours. So we've taken classic British store cupboard classics and turned them into ice cream flavours," said Hannah Wearne, a retail associate for The Village.

The ice cream is hand-made in Devon, England, and is available to try in-store or in 500ml takeaway tubs.

The pop-up store is open until 28th August.

France and parts of England experience driest July on record

Avocados and ice cream blasted into space for hungry astronauts