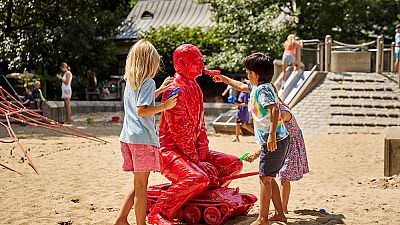 The regulars of a sandbox in Central Park, one of New York's most iconic locations, have been playing with a surprising new toy.

This week, the young'uns discovered a new installation near the slides, and if the toddlers didn't necessarily recognise the figure they were playing with, adults immediately identified Russian president Vladimir Putin perched on a tiny tank.

The sculpture is the work of French artist James Colomina, who used to be a dental technician before turning to street art. For him, his work is a "free art".

If he started to erect his creations in his hometown of Toulouse, the street artist is now displaying his work all over the world: Berlin, Barcelona, and now, New York, where the occupant of the Kremlin seems to be portrayed as a petulant scamp playing war games.

"Political engagement is an essential part of my work. I try to defend causes as best I can through my art. To denounce social problems, I react to injustice, intolerance and consumerism," Colomina explained.

It is the second time that the sculptor has reacted to the war in Ukraine.

In April 2022, he created 'The Child with the Rose': a masked child carrying an oversized rifle, the barrel obstructed by a rose.

"The places where my sculptures are installed act as an amplifier. It increases the resonance of the work. I like free and rather inaccessible places. Symbolic places."

Sometimes he picks on purpose unsuitable locations to play with the contrasts: "Macron spending his birthday in a tent with homeless people or Vladimir in the sandbox."

The bright red resin used by Colomina has become his signature touch, and over the last years, the value of his work has risen significantly on the market.

This growing fame is not without consequence. Colomina's pieces have been stolen four times.

But art theft is a phenomenon that's well known to street artists. Earlier this year, eight men were convicted of stealing an artwork by Banksy.

Theft is not the only issue though. While certain cities see an added value in having his art shown, some authorities aren't so receptive to his work. When Colomina put up a statue of a child painting the number 13 on the French Senate (a reference to the age of sexual consent proposed by the upper house of the French Parliament), the police quickly intervened.

As for the future? He has several works in progress but prefers to keep them a secret: "I do it on the fly!"