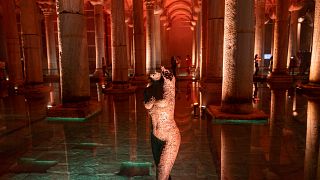 The ancient underground water chamber located under the popular Turkish city may seem familiar to the discerning moviegoer. It was used as a setting for the second James Bond movie, From Russia with Love, and in Inferno, the far less impressive but still visually inspiring 2016 Dan Brown adaptation. It reopened this July.

Built in 542 by Byzantine Emperor Justinian I, the cistern was part of a huge network used to supply the city and its palaces with running water.

“The edifice was in danger of collapsing at the slightest push,” says Aysen Kaya, deputy director of heritage at the Istanbul municipality.

During the extensive 5-year rehabilitation, steel rods were erected to connect the the building's 336 columns - twelve rows of 28, each 9 meters tall. The pink brick walls were cleaned of traces left by several improper interventions.

But beyond the technical arrangements necessary for the preservation of the building, the renovation has endeavoured to protect the mystical, almost spiritual character of the chamber (approximately 138 meters by 65 meters, capable of holding almost 80,000 cubic meters of water) by creating a light show that modifies perspectives and reveals hidden details.

A sound and light show

The famous upside-down Medusa heads that adorn two corner pillars – carved, legend obliges, upside down so as not to turn visitors into stone – garner a lot of attention and appear even more alive and terrifying.

Contemporary works have been added, such as a hand emerging from the water or jellyfish made of translucent glass that come to life via the gorgeous yet eerie projections of light that dance on the columns.

"We wanted a light installation that did not detract from the mystical atmosphere of the place," explains the representative of the municipality.

What are the stories behind Europe's iconic summer drinks?