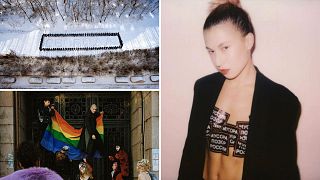 In 2021, fashion photographer and activist, Emmie America, was detained and fined by Russian authorities, after organising a politically charged photo shoot in Moscow, where 25 participants dressed in police uniforms surrounded the word 'Freedom' written in the snow.

The Russian-born photographer, who has worked with brands such as Vogue, Urban Outfitters, Guess and Calvin Klein, was charged by police for "organising a protest".

Coming from Russia, it's been an important part of my journey to figure out how to use the talent and the voice I have to talk about things that really matter and that are being very censored

Since Russia's brutal invasion of Ukraine, America has used her voice and considerable social media following to express her solidarity with the people of Ukraine and raise awareness of ways to help the ongoing country's war effort.

Euronews Culture spoke to Emmie America to find out more about her experiences working with Vogue, promoting LGBTQ+ rights and the changes in her life since the Russian invasion.

How would you describe your work?

"I mostly work in fashion imagery, but over time my work has become inherently more political. My work is very narrative-driven. I'm always inspired by characters and stories. I feel like I try to come up with certain universes, where I put in little details with hidden easter egg meanings."

"I want my photos to look like they're stills from a movie, rather than orchestrated fashion photos. I try to light things the same way, where I light the scene not the person."

How did you get into photography?

"I started doing photography when I was really young. It was kind of this impulsive thing, which now I'm really grateful for because I really didn't care if my work was good. I was a teenager so I just did it because I loved it."

"When I was 13 I got a camera for Christmas and this was the era where DSLRs were just becoming a big thing. And originally, photo kind of just became this medium through which I could create within fashion without physically making things. I'm not a crafty person - I hate doing things with my hands."

"And then I went to art school and started reading photo theory - which is where I really dug into it and realised that photo is just so unique. It has this incredible ability to make us believe in things and situate us into worlds which are not real."

What photography project of yours are you most proud of?

"I would probably say my Vogue Russia cover. First of all, it was my childhood dream - I remember being a kid and collecting Vogues. I remember telling myself, 'Don't worry if you don't ever get to shoot for them, that's fine. You can still be a good photographer and not get to Vogue'. So then to get this cover when I was 24 years-old felt surreal."

"But kind of more importantly was the fact that it was the first cover with the new editor and she really wanted to change the direction of the magazine. It was a political cover about protests in Russia being silenced and people not having a voice. The title of it was called 'Hear Us Out'."

What is your relationship with your homeland, Russia?

"It's like a very toxic family. I love Russia. I love so many people there and it's been so formative to me in so many ways. But it hurts so much to see what's happening."

"I was one of those people that really believed that we could change things - but since the war in Ukraine has started by Russia that just doesn't really seem like an option anymore."

"It feels really emotional and scary that you can no longer be part of this big part of you. You have to distance yourself, you have to step away and you have to figure out how to reinvent yourself."

"It's a really tough thing to realise that something that is so inherently part of you is just so toxic."

"For the past few years I was doing a lot of different kinds of activist work in Russia about freedom in many different senses. So now to feel like all of that was kind of for nothing, because nothing I will ever do will compensate for the amount of loss and pain that now has been inflicted by that country... it's a really tough thing to go through."

Have you received any negativity or hate since Russia's invasion of Ukraine?

"A little bit but I would say less than I expected so far. I mean I am very loud in my position about current events. And I feel like in general that's enough for people to trust you, especially when you have persistently been expressing your opinion even before the invasion."

A common theme present in your photography is the idea of 'home'. You are currently based in New York, but where is your home?

"I mean I've struggled with this question even before the war. I was sent to England to study when I was 10, and then I moved to America when I was 15 and I lived here until I was 20, before moving back to Russia. So, I feel like in general this idea of home has always been a very complicated one."

"I do still feel like Moscow is home and I love it so much. But it's a bubble within Moscow that I love. And it's now just burst very fast. Now I don't really feel like there's a safe space in Moscow any more."

What was it like being detained and fined for your 'Freedom' photo shoot?

"It's so funny because when it happened it seemed so dramatic and then a year later things like this are happening every day. When I got detained everybody was freaking out. There were chats on Telegram with all the Russian media people being like, "Who has lawyers? Who can pull her out?". It was crazy. Versus now, almost every single person I know has been detained. So, that's just a really freaky insight into Russian reality."

"It was a very surreal experience. It was quite funny to observe it from the inside and see how dysfunctional and how pointless everything was. I felt incredibly guilty for all the people who I dragged into it, but I think it did cause a resonance that was worth it in the end."

Much of your work focuses on the experiences of queer communities and promoting LGBTQ+ equality. What does gay pride mean to you?

"It means just being comfortable with who you are and not being afraid. And I think just not having to think about it honestly. Just enjoying life and how you want to live it."

"I grew up with a lesbian mother in Russia and she was very afraid. And I would just love for nobody to ever have to experience what she experienced."

Do you feel a responsibility to represent the LGBTQ+ community in your work?

"For sure. I mean I feel a responsibility to represent everyone that doesn't get represented enough. But also my work is often derived from very personal things. So a lot of the time it features illusions to real people in my life and real situations I've been through. So for sure a lot of different queer things often come up and I always try to stay conscious of that."

Your activism is more relevant than ever as Russia's parliament have recently moved to tighten restrictions on LGBTQ+ rights. What can people do to support equality and LGBTQ+ rights?

"Honestly just be loud. Don't be afraid. More people need to find the inspiration, the courage to just speak up, because when the riot gets too loud, no matter how hard whoever tries, it's not possible to calm it. When the fire's too big you can't have enough water to put it down."

This interview has been edited for length and clarity.

Visa pour l'image : Photojournalism in the spotlight at Perpignan