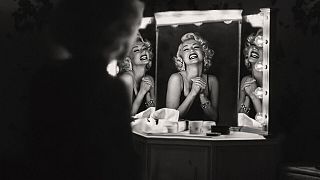 It’s that time of the year when studios start releasing their awards contenders and potential Oscar hopefuls, and no Golden Baldie-vying film has the Euronews Culture team more excited (so far) than 'Blonde', Netflix’s highly-anticipated Marylin Monroe biopic.

Adapted from Joyce Carol Oates’ speculative novel about the life of one of Hollywood’s most enduring icons, 'Blonde' looks like it could be something truly special.

Directed by Andrew Dominik, best known for epic 'The Assassination of Jesse James by the Coward Robert Ford' and the acerbically icky 'Killing Them Softly', it hits the big screen first as part of the Venice Film Festival’s line-up.

As is studio custom, once the Venice contenders have been announced, a new trailer tends to drop quite soon afterwards to keep the hype train running.

And boy, did it drop: the new two-minute clip is promising to say the least, and ever-so-slightly sinister.

Shot in chilling monochrome, it features flashing pap bulbs, agonised screams and the distinct hint of creepy male gaze oozing from the Hollywood studio system, all soundtracked to an eerily slowed down version of Monroe’s 'Gentlemen Prefer Blondes' hit song ‘Diamonds are a Girl’s Best Friend’, finally capped off with the tagline: “Watched by all, seen by none”.

Check it out for yourself:

If you don’t have goose bumps or aren’t in the slightest bit intrigued, the Voight-Kampff test may be required.

That being said, 'Blonde' has had its fair share of red flags…

Indeed, it’s not been smooth sailing for Dominik’s long-gestating passion project, with delays (development reportedly began in 2010) and rumoured pushback from Netflix regarding some of the film’s rawer content.

Plus, it is a truth universally acknowledged that a single studio in possession of a high-profile biopic often royally mucks it up.

Whether they’re subject / estate-approved, thereby revealing the overall approach to be overly reverent and toothless (see: 'Bohemian Rhapsody'), or simply an overly ambitious gambit that spreads itself too thin by misguidedly attempting to tackle the entirety of a person’s life/career (see: 2021’s Aretha Franklin biopic 'Respect'), biographical films are a tricky subgenre to get right.

But they remain a huge box-office draw and from the look of things, 'Blonde' could very well be that rarest of things for the subgenre: a chronicle of an icon’s life that has teeth and isn’t afraid of delving into the darkness.

I Wanna Be Loved By You

One intriguing detail that promises much is the rare NC-17 rating the film has acquired in the US, making it the first Netflix Original film to obtain the adults-only rating.

It’s usually a restrictive tag that most studios tend to shy away from for the sake of wider audience attention and because of strict guidelines studios have to adhere to regarding advertising. This explains why 'Bohemian Rhapsody' cackhandedly sidestepped all the notorious drug-use and wild partying antics of Freddie Mercury.

But enough Rami Malek bashing for one day.

'Blonde' doesn’t seem to be too concerned with playing nice. Even when Netflix insisted on bringing on 'Tenet' editor Jennifer Lame on board to temper some of the film’s raunchier moments, the streamer gave in and allowed Dominik to release his full version.

Dominik was thrilled to colourfully state in an interview with Screen Daily that 'Blonde' is “a demanding movie. If the audience doesn’t like it, that’s the fucking audience’s problem. It’s not running for public office.” He added, in an interview with Vulture, that “there’s something in it to offend everyone.”

While the trailer, somewhat predictably doesn’t reveal some of the graphic sexual content that Netflix execs are having sleepless nights about, lines like “Marilyn Monroe only exists on the screen” do give us a sombre look at some of the thematical content we might be confronted with: the darker sides of the Hollywood dream machine, the fascinating Norma Jeane / Marilyn Monroe dichotomy (buttressed by the use of reflective surfaces), as well as the tantalizing dismantling of overbearing stardom and what it means to be an icon.

At least it sticks to Joyce Carol Oates’ novel, in that it seems to portray the downfall of an innocent woman who was exploited by cruel men, a depiction that can only be better than a sanitized retelling of a life that limits itself to “Wasn’t she iconic?” vapidity.

As if that wasn’t enough, there’s no denying that Ana de Armas, whose star has been on the rise ever since 2019’s 'Knives Out' and last year’s James Bond adventure 'No Time To Die', seems perfect in the titular role.

So, get ready for what will hopefully be a risk-taking exception to the usual biopic dross.

And whatever the end result may be – a future awards contender, a singular take so bold it scares the Academy away, or an overhyped passion project – 'Blonde' is going to be one of the most talked-about films of 2022.

'Blonde' has its world premiere at the Venice Film Festival in early September, and will arrive on Netflix on September 28.

The Doggfather: Snoop Dogg gets his own biopic

Blade Runner 2099: why has Amazon greenlit the new series?