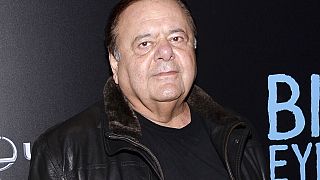 A New Yorker by birth, Sorvino was raised in Brooklyn by a mother who taught piano and a father who worked in a factory. After attending the American Musical and Dramatic Academy in New York, he made his Broadway debut in the 1964 musical ‘Bajour’ and his film debut in Carl Reiner’s 1970 film “Where’s Poppa?”

An imposing 6’4”, Sorvino was a mainstay in films and television, playing an Italian American communist in Warren Beatty’s “Reds,” Henry Kissinger in Oliver Stone’s “Nixon” and mob boss Eddie Valentine in “The Rocketeer.” He would often say that while he might be best known for playing gangsters (and his very good system for slicing garlic) his real passions were poetry, painting and opera.

In the 1970s, he acted alongside Al Pacino in “The Panic in Needle Park” and with James Caan in “The Gambler,” reteamed with Reiner in “Oh, God!” and was among the ensemble in William Friedkin’s bank robbery comedy “The Brink’s Job.” In John G. Avildsen’s “Rocky” follow-up “Slow Dancing in the Big City,” Sorvino got to play a romantic lead and use his dance training opposite professional ballerina Anne Ditchburn.

He was especially prolific in the 1990s, kicking off the decade playing Lips in Beatty’s “Dick Tracy” and Paul Cicero in Martin Scorsese’s “Goodfellas,” who was based on the real-life mobster Paul Vario. He also made in mark starring in 31 episodes of Dick Wolf’s “Law & Order.” He followed those with roles in “The Rocketeer,” “The Firm,” "Nixon,” which got him a Screen Actors Guild Award nomination, and Baz Luhrmann’s “Romeo + Juliet” as Juliet’s father, Fulgencio Capulet. Beatty would turn to Sorvino often, enlisting him again for his political satire “Bulworth,” which came out in 1998, and his 2016 Hollywood love letter “Rules Don’t Apply.”

Sorvino had three children from his first marriage, including Academy Award-winning actor Mira Sorvino. He also directed and starred in a film written by his daughter Amanda Sorvino and featuring his son Michael Sorvino, “The Trouble With Cali”, in 2012.

Paul Sorvino died on Monday, July 25, of natural causes at the Mayo Clinic in Jacksonville, Florida, according to his publicist.

Silence - a Martin Scorsese film and a premier for the Pope