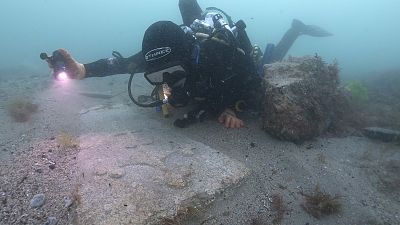 The oldest shipwreck to survive in English waters has been granted the highest level of protection by the UK government, following its discovery in Poole Bay in Dorset.

The survival of the 13th century Mortar Wreck, which was carrying gothic Purbeck stone gravestones, is extremely rare.

There are no known wrecks of seagoing ships from the 11th to the 14th centuries in English waters, according to Historic England, a public body which oversees England’s historic environment. As such, the new discovery is the earliest English designated wreck site where hull remains can be seen.

The wreck was discovered by local charter boat skipper Trevor Small, who reported his discovery to archaeologists from Bournemouth University.

“In summer 2020, I discovered what I believed to be an undetected wreck site,” said Small. “Recent storms had revealed something unknown on the seabed. I was granted permission to dive the wreck.”

“The rest is history! I've found one of the oldest shipwrecks in England.”

The shipwreck is referred to as the “Mortar Wreck”, Bournemouth University said, because much of its cargo included Purbeck stone mortars, which are large stones used by mills to grind grain into flour.

“Other finds include a large cauldron for cooking soup, a smaller cauldron, which would have once had a long handle for heating water and mugs covered in concretion – a hard solid mass that forms over underwater objects over time,” said Historic England.

Tree ring dating of the wreck indicates that the timbers used to construct the hull were from Irish oak trees, felled between 1242-1265 during the reign of King Henry III, said Historic England.

It is not clear where the ship was going before it sank, with one theory being that it could have been lost on its way out from the Dorset coast.

In addition to the Mortar Wreck, two other shipwrecks have also been given government protection.

The remains of these ships included several cannons, a large anchor, at least 50 very large lead ingots with unidentified markings and stone cannonballs.

The two ships are thought to have become stranded on the Shingles Bank, a well-known navigational hazard in the Needles Channel, before they sank.

The addition of these three wreck sites means there are now 57 protected wreck sites in English waters.

Their status means that divers need a special licence administered by Historic England on behalf of the UK’s Department for Digital, Culture, Media and Sport to dive the wrecks.