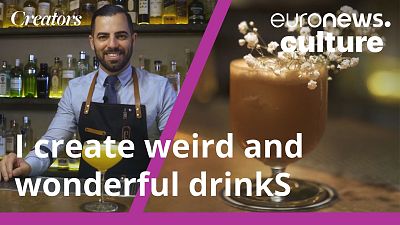 From salmon-flavoured gin to chorizo-flavoured whisky, Antonio Naranjo sees no limits to the unusual flavour combinations he can introduce to his cocktails.

“I always try to go to the weird parts that people don’t know,” he says. “If I need to make a cocktail weird, I go for something like anchovies, or maybe salmon or maybe cheese. Something normally you don’t find in the bar.”

The Cuban mixologist has been playing with people’s palettes for years, since he first decided to become a bartender after leaving Cuba at age 20. His recipes go far beyond your classic cocktails, producing what he calls “disruptive drinks.”

Born into a family of artists, Naranjo says his great-grandfather was one of the first 'cantineros' in Cuba, a pioneer of the elegant bartending tradition the country became known for. Naranjo says he stumbled into bartending because people assumed he knew how to make cocktails due to his heritage.

“My first time making drinks was in hostellery school,” he says. “When guests ordered a drink they would always give me this responsibility (to bartend) because I’m Cuban and they think for sure I know how to (make drinks). And I loved it.”

But the turning point for him, when he really began getting creative with cocktails, happened while he was an apprentice for the world-renowned chefs Ferran and Albert Adrià. Naranjo says he spent six months at their Barcelona establishments Tickets and 41 Degrees, where the Michelin-starred chefs inspired him to “mix with sense.”

“(The Ferrans) always said to me, you need to ask all the questions about why this colour, why these flavours, why this alcohol base,” he says. “And as soon as you have all the answers and the cocktail is mixed, then it’s done.”

After his apprenticeship, Naranjo further honed his skills at Himkok in Oslo, which consistently ranks on every annual list of best bars in the world. And in 2017, he seized an opportunity to open his own cocktail bar in Barcelona’s El Born neighbourhood, which he called Dr. Stravinsky.

The tiny bar on the corner of two pedestrian streets is so hard to find that it’s become an inside joke that people only arrive at Dr. Stravinsky by accident. Naranjo doubled down on the mystery by decorating the walls with unlabeled bottles, giving it the allure of an old-school apothecary.

“I think the vibe of the bar was to make people feel naked when they get inside because you have bottles without labels and they don’t know what they’re going to drink,” he says. “They are in our hands. That’s important because then we can play with clients in our own way.”

Dr. Stravinsky became a playground where Naranjo’s creativity could run wild. He says he wanted his bar to be completely different from any cocktail bar he had seen before. Stravinsky would not serve beer or wine, it would not use industrial ingredients and everything would be made by hand.

The menu presented “a cosmos of flavours” to guide people when choosing their drinks, based on flavour profiles they preferred. Naranjo’s teams also began experimenting with maceration, fermentation and micro-distillation, adding unusual flavours like roots and soil to different spirits to produce complex cocktails.

“I think the most important thing when we opened Stravinsky was that we had the opportunity to make all the ideas I had in my head without limits,” Naranjo says. “That, I think, was the key to making Stravinsky different – the possibility to be creative without limits.”

His gamble paid off. In a city saturated with bars, Dr. Stravinsky surprised everyone by becoming a runaway success, winning a string of prestigious bartending awards. Two years after opening, it earned a place on the list of The World’s 50 Best Bars 2019, ranking 25th.

Making all the ingredients of his cocktails from scratch allows Naranjo to control every aspect of the final product, from how much sugar is added to how many spices are involved. He says he wanted to further explore how these layers of flavour can change cocktails with his new bar Especiarium, which opened after the Covid-19 lockdown in Barcelona.

“If you ask for a classic cocktail, most people will tell you it has three ingredients,” Naranjo explains. “But for us, this classic cocktail where they see only three ingredients actually has 74, because all these alcohols have different spices inside. That’s why I think spices, as soon as you understand them, can give you one of the best products in the world.”

The menu he created at Especiarium puts savoury cocktails in the spotlight. Some of the signature drinks include his “Curryquiri” which blends curry-infused rum with lime and simple syrup, or his “Risotto Martini” made with blue cheese-flavoured vodka. His “Saltbae” cocktail is a unique twist on the Bloody Mary, with a theatrical presentation that features a mechanical arm in the pose made infamous by Turkish influencer Nusret Gökçe.

Naranjo says one of his long-term career goals is to change the way bartenders are seen by society.

“I think all bartenders are chefs of cocktails because we have the opportunity to mix flavours and textures,” he says. “I see that now people are looking at bartenders differently. We were fighting ten years ago to change people’s minds. We are creative people, we’re not just party people. We are people who make experiences.”