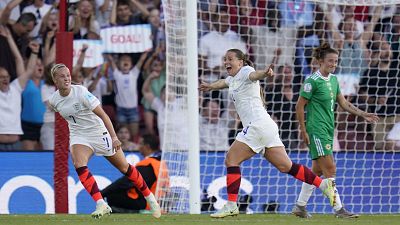 The next edition of the Fifa video game will feature women’s club teams for the first time ever.

Electronic Arts have announced that Fifa 23 will include two women’s leagues as playable options. The FA Women’s Super League and the French Division 1 Féminine will be the first, however EA has said they plan to add more in the future.

There will also be a woman on the cover for the first time ever in a Fifa game.

Women’s football was first made available on the Fifa 16 game, when some international teams were playable. This was increased to 17 country teams for last year’s Fifa 2022.

But this is the first time that women’s teams at the club level will be available in the game.

There will also be international teams available in Fifa 2023 as the game will feature the Women’s World Cup Australia and New Zealand 2023, alongside the Men’s World Cup Qatar 2022.

“I’m delighted that the Barclays Women’s Super League will be one of the first women’s club competitions to feature in EA SPORTS FIFA 23, with the franchise historically having one of the largest and most engaged gaming communities in the world,” said Navin Singh, The FA’s Commercial Director.

“The added visibility a global brand like EA SPORTS will provide for our league, teams and players cannot be underestimated.

“This very much supports our ambition to accelerate the growth of the women’s game in England, and highlights our commitment to open up the Barclays Women’s Super League, and make it even more accessible, to new audiences around the globe,” he added.

The Women’s Super League will give players access to 12 teams including Arsenal, Chelsea, Manchester City, Manchester United and Tottenham Hotspur. In the French Division 1 Féminine there will be Paris Saint-Germain, Lyon, Montpellier and Paris FC.

The news comes as the ongoing Women’s Euro tournament shows the increased popularity in women’s football. With the final set for 31 July at Wembley Stadium in London, England are the first team through to the semi-finals after their victory against Spain yesterday.