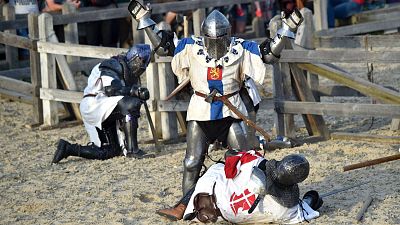 The name originates from the Old French word "béhourd' which means to "wallop".

Tournaments and buhurt gatherings are held all around the world, but the sport is most popular in Europe.

Those brave enough to take part aim to knock down their opponent, using blows and various mixed-martial arts takedown techniques.

The fights are refereed by knight marshals with special training and combat experience, to ensure that the sport's tight rules and safety regulations are complied with.

There are a number of prohibited striking zones, while dislocations and weapon thrusting are strictly prohibited.

Close attention is also paid to the armour worn by competitors. One person's full set of armour must originate from the same place and within a fifty-year time span. It must also be in the style of armour used from the dates 1200 to 1699, to ensure medieval authenticity.

The Battle of the Nations

One of the largest international medieval battle championships is the Battle of the Nations, which was first held in 2009, in Khotyn, Ukraine.

Up to 25 countries compete in the tournament each year in the hope of gaining medieval combat glory.

However, for many participants buhurt is more than just a sport. It's about culture, history, community, and craftsmanship, and offers competitors a chance to travel around the world.

In Madrid, members of Ursos Custodes, a non-profit buhurt sports club, compete three times a week and hold regular exhibitions at the Manzanares el Real Castle to demonstrate the sport to the public.

"Ultimately it’s a group of people who are already like your family, and it’s not just the experience of arming yourself, but everything that goes with it. The trips we take, the places we visit, the people you meet. All of that makes you like it more and more," says Celia Torrent, a member of Ursos Custodes.