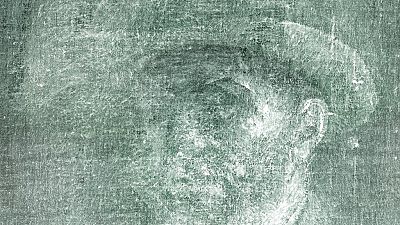 X-rays show the Dutch artist’s face with a hat and neckerchief   -   Copyright  Graeme Yule/National Galleries of Scotland
By Theo Farrant  with AP  •  Updated: 14/07/2022

A hidden self-portrait of what experts believe is Vincent Van Gogh has been discovered behind one of his paintings.

The image was discovered by the National Galleries of Scotland during an X-ray scan of another work by the famous Dutch artist, 'Head of A Peasant Woman' from 1885.

The newly found portrait shows a person with a beard and a complete left ear - which the artist famously cut off in 1888. However, the Vincent Van Gogh museum says it's "almost certainly" a self-portrait of the artist.

Lesley Stevenson, senior paintings conservator at the National Galleries of Scotland, was in the room when the X-ray was taken.

"She said she was absolutely bowled over when she saw it. She immediately recognised it was a self-portrait by Van Gogh. And so she sent me a text, and I was actually out shopping at the time and I received it on my phone, a tiny little image, but it was quite amazing. And I was very excited," says Fowle.

Conservators now aim to reveal the hidden portrait, which lies beneath layers of glue and cardboard.

Before they do, the portrait and the X-ray, displayed in a lightbox, will be on show between 30 July and 13 November 2022 at the Royal Scottish Academy in Edinburgh.