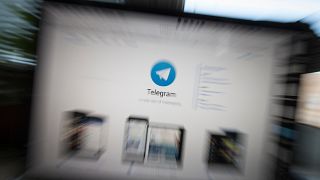 Around half of all references to the Holocaust on the Telegram messaging app deny or distort the truth.

A new study by UNESCO, the UN Department for Global Communications, and the World Jewish Congress has found there is an alarming amount of Holocaust denial on social media.

The study looked at over 4,000 posts about the Holocaust across multiple social media platforms including Facebook, Instagram, TikTok and Twitter. But it was on Telegram that the the largest number of problematic posts were found.

Telegram is a messaging app that's similar to WhatsApp, but it offers greater privacy through a more thorough encryption process. Many people also use it because it’s not affiliated with any social media platforms, unlike WhatsApp which is part of Meta (formerly Facebook).

The Dubai-based app was founded by Russian brothers Pavel and Nikolai Durov and is reportedly used by over 550 million people. Pavel Durov has been adamant that he wants the app to defend free speech, which means that much of the content is completely unmoderated.

The lack of moderation meant the UNESCO study found the highest proportion of Holocaust denial or distortion on Telegram.

49 per cent of all posts relating to the Holocaust on Telegram were found to distort or deny history.

Of the four languages studied, 80 per cent of the posts in German were found to deny or distort.

Holocaust denial is the term used for any act that denies the historical reality of the Holocaust. While Holocaust distortion refers to efforts to minimise the atrocity, blame the Jews for the genocide, defer responsibility, or portray the event in a positive light.

“Understanding the history of the Holocaust is crucial to safeguarding our future,” UN Secretary-General António Guterres wrote in the report’s foreword. “If we fail to identify and confront the lies and inhumanity that fueled past atrocities, we are ill-prepared to prevent them in the future.”

The UN chief added, “This report is an urgent wake-up call that must jolt us into action – to pursue truth, remembrance and education, and together build a world of peace, dignity and justice for all.”

Some of the posts on Telegram which were analysed included a “Holocaust Fact Check Virtual Tour of Auschwitz”. In the “tour”, the user made historically debunked claims that the atrocities committed at the concentration and death camps were not possible.

One Telegram post attempted to justify the Holocaust by claiming Jews were behind the failings of both capitalism and communism.

Another category of distortion the study uncovered were posts equating the Holocaust with other events that are not comparable.

Although the study notes the importance of comparing the Holocaust with similar events, the flagged posts often claimed policies relating to the COVID-19 pandemic were similar to those of the Nazi regime. These were the most prevalent forms of distortion.

Dealing with the deniers

The study also showed that platforms with more community guidelines and moderation policies had less misinformation, denial or distortion.

On Twitter, 19 per cent of posts denied or distorted. This compares with 17 per cent on TikTok, eight per cent on Facebook, and three per cent on Instagram.

The platforms with stronger community guidelines and moderation policies were most effective at removing problematic content. Facebook and Instagram have taken some of the most public steps to address misinformation and showed a notable reduction in posts compared to other sites.

“The biggest defence against the dangers of Holocaust denial and distortion is to advance historical literacy informed education about the history of the Holocaust within school curricula and education systems,” the report says.

But it’s not just knowledge about the Holocaust that’s needed. It’s also important for education to cover online frameworks of spreading misinformation.

The report also suggests that Holocaust education organisations should actively engage with Telegram to stem the source of misinformation on the sites.

The report makes many suggestions for actions that online platforms should take. But as many of them focus on forms of moderation, with Telegram’s anti-moderation stance, Holocaust denial is likely to remain a problem.