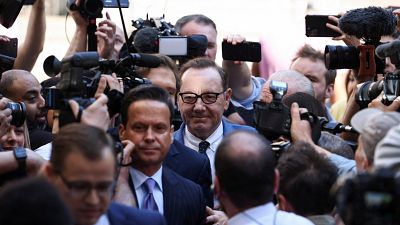 Kevin Spacey has been accused of sexual assault and appeared in a UK court today   -   Copyright  Henry Nicholls/Reuters
By Tim Gallagher  •  Updated: 15/07/2022

Kevin Spacey today pleaded not guilty to charges of sexual assault at the Old Bailey, London.

The 62-year-old appeared in the dock during a 15-minute hearing, in which he gave his plea to four counts of sexual assault, alleged to have taken place in the UK between 2005 and 2013.

Spacey was artistic director at the Old Vic theatre in London during this time.

Spacey is charged with four counts of sexual assault and one count of "causing a person to engage in penetrative sexual activity without consent".

The first two charges of sexual assault relate to a man who is now in his 40s. They are alleged to have taken place in 2005 in London.

The Oscar-winning actor is also accused of sexual assault and causing a person to engage in penetrative sex without consent, by another man who is now in his 30s, in 2008 in London.

The final count of sexual assault is brought by a third man, also now in his 30s, relating to an incident in 2013 in Gloucestershire. Kevin Spacey today appeared at Westminster Magistrates Court, London to face the charges.

Has Kevin Spacey been in court before?

Spacey previously attended a hearing on 16 June this year at Westminster Magistrates Court but did not enter a plea.

At that time his lawyer said he 'strenuously denied' the allegations.

“Mr Spacey strenuously denies any and all criminality in this case,” said Patrick Gibbs, who is representing Spacey. He added that Spacey must face the charges “if he wants to proceed with his life."

Prosecutor Natalie Dawson argued that due to the severity of the sentence, if he were to be found guilty it would be "reasonably foreseeable" that Spacey wouldn't return to the UK to stand trial.

During this hearing Gibbs referenced Spacey's international work and ageing dog as reasons he should be given unconditional bail.

“Is he to be incarcerated in his flat in London, unable to work, unable to audition to work?”

Who is Kevin Spacey?

Spacey is a well-known actor who is perhaps most recognisable to the public from his roles in ’American Beauty,’ ‘Seven,’ and the Netflix show ‘House of Cards’.

Spacey is a two-time Oscar-winner but his career has taken a back foot in the last few years.

During the period of the allegations, Spacey ran London’s Old Vic theatre.

Spacey previously said he was happy to ‘voluntarily’ appear in court to defend his innocence.

In a statement made to Good Morning America, Spacey said:

"I very much appreciate the [Crown Prosecution's] statement in which they carefully reminded the media and the public that I am entitled to a fair trial, and innocent until proven otherwise.

"While I am disappointed with their decision to move forward, I will voluntarily appear in the UK as soon as can be arranged and defend myself against these charges, which I am confident will prove my innocence."