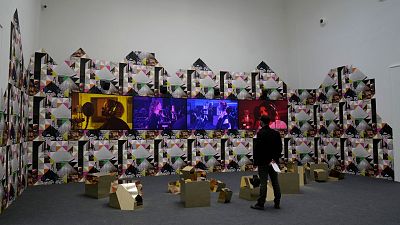 A man stands next to an installation part of the "Feeling Her Way" by artist Sonia Boyce, at the Great Britain's pavilion during the 59th Biennale of Arts exhibition in Venice   -   Copyright  AP Photo / Antonia Calanni   -
By Charlotte Elton  •  Updated: 13/07/2022

Hoping to go to an exhibition this summer? You'll be spoilt for choice.

From big-hitters like the Venice Biennale to quirky, off-the-beaten track galleries, institutions across Europe are hosting some amazing events.

Whether you're into comic books or sculptures, African sci-fi or Norwegian folktales, there's no shortage of things to see.

So to help you plan ahead - here are some of the best exhibitions to put in your calendar this summer.

The Venice Biennale: The Milk of Dreams

Where: Galleries across Venice

The Biennale has returned to Venice for the first time since 2019. Showcasing 1433 works from 213 different artists, this year’s exhibition focuses on 'the representation of bodies and their metamorphosis’, ‘the relationship between individuals and technologies,’ and ‘the connection between bodies and earth’.

In 'The Milk of Dreams' - the surrealist children’s book that lends the exhibition its name - characters constantly find their lives turned upside down by magic and imagination.

Hosted in the majestic Palazzo Strozzi in Florence, this historic exhibition traces the life, work, and legacy of one of the most important Italian masters.

Donatello’s sublime sculptures and paintings will be exhibited alongside masterpieces by a who's-who of world-famous artists, including Brunelleschi, Masaccio, Andrea Mantegna, Giovanni Bellini, Raphael and Michelangelo.

This massive exhibition offers a multidisciplinary panorama of 1920's German art, from painting to photography, design, architecture, and music. Comprised of nearly 900 works, it reveals the creative expression, hedonism, and philosophy of a chaotic period.

Many of the paintings in this exhibition were hated by the Nazis, who decried them as the "art of Cultural Bolshevism" - all the more reason to visit.

East of the Sun and West of the Moon

This is the opening exhibition of the brand new Nasjonalmuseet, a 54,299-square-metre institution that will be one of the largest art museums in Europe.

Where: The Louvre, Paris, France

60 years ago, Yves Saint Laurent debuted his first fashion collection. In honour of this anniversary, a new exhibition will showcase a number of “exceptional garments” from his body of work. Expect light, gold, and elaborate decorations.

Pharoah of the Two Lands: the African Story of the Kings of Napata

An “African saga” that spotlights the ancient kingdom of Nubia. In 730 BC, the Nubian king Piankhy conquered Egypt, ruling over the vast kingdom for more than a century. This exhibition reveals the previously untold story of a powerful dynasty.

This exhibition showcases more than 50 years of Spanish artist Teresa Lanceta’s beautiful textile artwork. Expect a focus on women’s work from an innovative weaver who “assumes the unexpected” and embraces collaboration.

From the Avengers to Snoopy, from Tintin to Batman, some of the world’s most beloved characters come from comic strips. This comprehensive exhibition brings together more than 300 original works in this genre - including an excerpt from the 1896 “Yellow Kid” series, widely regarded as the first modern comic strip.

In the Black Fantastic

This exhibition invites viewers to “imagine a fantastical future.” Myth, science fiction, spiritual traditions and the legacy of Afro-futurism are all “sampled, reimagined and recontextualised” through liberating and innovative art.

Searching for the Eternal: Celebrating the art of painting on stone