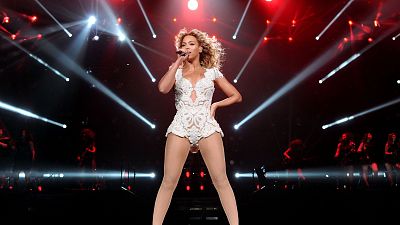 Beyoncé has made music history yet again after shattering another record.

With new song ‘Break My Soul,’ the trailblazing artist has become the first woman in history to have 20 top 10 hits on the Billboard Hot 100 as a solo artist, and 10 on the chart as a member of a group.

Following in the footsteps of Paul McCartney and Michael Jackson, Beyoncé is just the third musician to accomplish this feat.

Before Break My Soul, the billionaire musician’s last Top 10 song was 'Savage', a 2020 collaboration with rapper Megan Thee Stallion.

The new record is the latest in a series of successes that make the record breaking artist worthy of the title Queen Bey.

In 2001, Destiny’s Child - and 19 year-old singer Beyoncé Knowles - won their first Grammy with “Say My Name.”

Now 40, Beyoncé boasts a mammoth 28 awards and 79 nominations, making her the most nominated woman and the most awarded singer in Grammy history.

In 2013, Beyoncé smashed the record for fastest-selling iTunes album of all time, with fans buying 828,773 copies of her self-titled record in just three days.

The same year, the artist embarked on her Mrs Carter Show World Tour, which became the highest-grossing female and solo tour of the year.

As if this wasn't enough, she's also had six consecutive number one studio albums - the second highest number tallied by any female artist. She is pipped only by Taylor Swift, who boasts 10 number one albums.

In September 2011, she broke the internet after announcing that she was expecting her first child.

Born four months later, Blue Ivy quickly became the youngest person ever to appear on a Billboard chart after clips of her crying appeared on Dad Jay-Z’s track ‘Glory.’

In 2017, Beyoncé broke the yearly record for most-liked image on Instagram too, after announcing that she was pregnant with twins.

The image - a Renaissance inspired portrait of the artist in a flowing veil - amassed more than 5 million likes in 3 hours, and 11 million likes overall.

However, the award for the most liked Instagram picture of all time goes to... an egg, which has amassed 56 million likes to date.