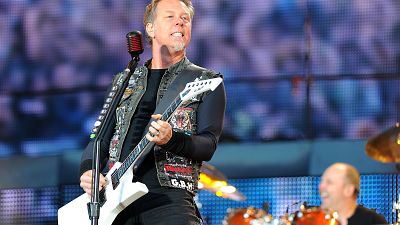 This time it’s the song “Master of Puppets” by heavy metal rockers Metallica.

The 1986 tune has rocketed in popularity after featuring in a scene of the Stranger Things season 4 finale.

The final two parts of the epic latest series of Stranger Things were released on July 1. In the final two-hour and 30-minute episode, Eddie Munson, played by Joseph Quinn, shreds on his guitar, playing the track to distract a horde of demonic bats.

At time of writing, Master of Puppets was at number 6 on both the USA and UK Top 50 playlist on Spotify.

Metallica love it too

“The way The Duffer Brothers have incorporated music into Stranger Things has always been next level, so we were beyond psyched for them to not only include “Master of Puppets” in the show, but to have such a pivotal scene built around it,” the band wrote.

“We were all stoked to see the final result and when we did we were totally blown away... it’s so extremely well done, so much so, that some folks were able to guess the song just by seeing a few seconds of Joseph Quinn’s hands in the trailer!! How crazy cool is that?”

“It’s an incredible honour to be such a big part of Eddie’s journey and to once again be keeping company with all of the other amazing artists featured in the show,” they concluded.

Metallica has also hit back at long-standing metal fans who have expressed annoyance at the influx of new fans thanks to the Netflix show.

One fan wrote on the band's TikTok: “I'm sorry Metallica for all the fake Stranger Things fans love ya”.

Metallica responded to that fan with this message: “Don't be sorry. Everyone is welcome in the Metallica Family. If they like Puppets, chances are they'll find plenty of other songs to get into”.

They also posted a top comment saying: “FYI - EVERYONE is welcome in the Metallica Family. Whether you’ve been a fan for 40 hours or 40 years, we all share a bond through music. All of you started at ground zero at one point in time.”

Master of Puppets isn’t the first 80s track to gain renewed interest thanks to the latest series of Stranger Things.

At the very top of the same Spotify playlist is “Running Up That Hill” by Kate Bush. The song was featured in a pivotal scene in the first part of Stranger Things season 4 and introduced a whole new generation of fans to the singer.

Running Up That Hill shot to number one in the UK music charts and re-entered the US charts at number four.

The 63-year-old artist became the oldest ever woman to have a top 10 hit in the US.

“This is a whole new audience, they have never heard of me, and I love that,” Kate Bush****said in response to the news.

Both Master of Puppets and Running Up That Hill have been used in emotionally charged scenes in the show. The Bush track was played on a walkman to Max, played by Sadie Sink, to save her from a grisly fate.

“I thought what a lovely way for the song to be used as a talisman for Max. It is very touching really,” said Bush, who added that she loved the series and had binge-watched it with her family after being told about it by friends.

“We have watched it from the word go,” said the singer.

With another season confirmed to be in the works, which 80s classics will Stranger Things resurrect next?