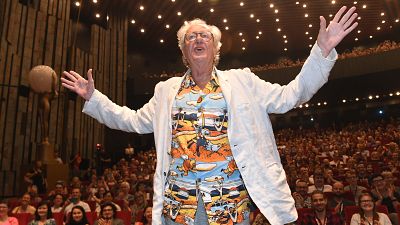 The ongoing 56th edition of the Karlovy Vary International Film Festival is providing a platform for Ukrainian films.

American actor and film director Liev Schreiber -- who is of Ukrainian background -- has made a special ''ambassadorial'' trip to the festival to speak about his Blue Check Ukraine charity project.

“The most motivated and the most effective people on the ground are Ukrainians," Schreiber said.

"So rather giving your money to large international charities, try to find the way to go inside and help the people helping who are helping themselves. And that was the idea [behind] Blue Check Ukraine.”

The Odesa International Film Festival, which traditionally takes place after Karlovy Vary, has been cancelled this year.

In a sign of solidarity, Karlovy Vary is helping its Ukrainian colleagues by organizing Stand With Ukraine information panels and devoting a section of its programme to special screenings called Work in Progress, which this year showcases eight unfinished Ukrainian films.

The festival is presenting the films to international sales teams, to better prop up the Ukrainian film industry.

The Odesa festival's organisers are hoping that Ukraine will win the war, vowing to prepare for their festival to take place in July next year.