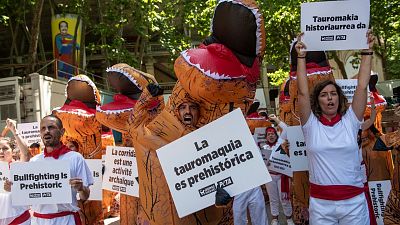 People dressing as dinosaurs protest against animal cruelty before the start of the San Fermin festival   -   Copyright  AP Photo
By Charlotte Elton  •  Updated: 06/07/2022

Animal rights activists dressed as dinosaurs paraded through the streets of Pamplona, Spain on Tuesday, 4 July to protest the San Fermin 'Running of the Bulls' festival.

Dozens of protestors chased one another through the town, with many clad in huge inflatable dinosaur costumes.

The protest came two days before the opening of the city’s traditional San Fermin festival.

Organised by People for the Ethical Treatment of Animals (PETA) and Spanish NGO AnimalNaturalis, it is the 18th year in a row demonstrations have taken place ahead of San Fermin.

What is the Running of the Bulls?

Between 6 July and 14 July every year, more than one million people descend on the Northern Spanish town of Pamplona for the San Fermin festival.

Each morning, six charging bulls pursue thousands of runners through the city’s cobbled streets to the bullring.

The average duration of a bull run is 2 minutes 30 seconds and the herds are known to reach speeds of 24 km/h. The bulls then take part in the afternoon bullfight.

Since 1910, 16 participants have died during the bull run.

The tradition dates back to the 16th century - but activists argue it is cruel and barbaric.

“Bullfighting is the long ritualised execution of bulls and many tourists who come to the bull runs don’t actually realise that the same bulls they're running down a couple of streets with are later killed in the bullring that day,” said Chelsea Monroe, senior digital campaign officer for PETA.

“They’re stabbed over and over again for 20 minutes until they’re dead. We want the tourists to know that their money is supporting this really cruel industry.”

The 2022 festival is the first since 2019, after the 2020 and 2021 events were cancelled due to COVID. Organisers expect the population of the town to swell to at least one million.

Where is bullfighting legal?

Though San Fermin hosts the most famous event, bull running is a semi-regular event in towns across Spain, Portugal and Mexico.

However, the events have become increasingly controversial in recent years, as activists rail against the associated cruelties of bullfighting. Every year, 35,000 bulls die in Spanish bullfights.

Catalonia banned bullfighting in 2010, a prohibition that has since been imposed in the Canary Islands and parts of Galicia.

Last month, a judge in Mexico city extended a ban on the practice ‘indefinitely.’ Since 2013, four states in Mexico have banned bullfights.

Activists believe that the issue has reached a critical tipping point.

“The debate over the future of bullfighting in Spain has never been so alive and the authorities must take a clear stance,” said Jana Uritz of AnimalNaturalis.

“We demand the necessary courage from them to say whether they favour animal torture or, on the contrary, are ready to prohibit such barbarities.”

According the activist group, 90 per cent of Spanish people did not attend a festival event involving bulls in 2014-15, the last year for which data exists.