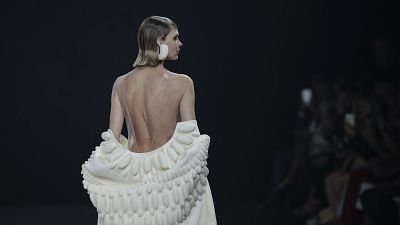 Haute Couture with all its pomp and pagentry has returned to Paris this week for its first fully in-person iteration since the pandemic began. The fashion industry’s most traditional and most revered sector was forced to present its offering online to its high net worth clientele when the pandemic hit.

Despite the disruption to Haute Couture Week over the past couple of seasons, the made-to-measure branch appears to be thriving.

Long-standing couturier Jean Paul Gautier announced he would be stepping back from designing in 2020 but rather than shut his label, he has handed over his atelier to a guest designer each season. For autumn/winter 22, Olivier Rousteing, creative director at Balmain, became the third guest designer for Jean Paul Gaultier.

Demna Gvasalia, creative director at Balenciaga, was also one to watch this week as he presented only the third haute couture collection to be created for the house since the eponymous designer died in 1968. Juana Martín also hit the headlines as the first Spanish female designer to show on the official haute couture schedule this season.

Martín’s noteworthy debut might sound surprising, given how well established and respected the Spanish fashion industry is, but understanding the strict regulation that surrounds the world of haute couture and its governance in Paris might explain more.

How is ‘haute couture’ regulated?

Haute couture (or ‘high sewing’ for non-French speakers) is often considered the most prestigious form of fashion, exemplifying the highest standards in the craft.

The term ‘haute couture’ has been a legally protected title since 1945 that must be awarded to a designer - or taken away - by the Fédération de la Haute Couture. The term is regulated by France’s Ministry of Industry, much in the way champagne must be produced in the Champagne region.

The Fédération, which organises Haute Couture Week and protect the interests of the industry, goes back much further than the legislation, to 1868. As of 1 July 2022, its president is Bruno Pavlovsky, who is also president of Chanel.

To be branded as an haute couture designer depends on meeting and maintaining certain requirements. Members must:

Members only. If you're name is not on the list...

This season, 30 couture houses are on the schedule from historic houses including Chanel, Fendi and Dior, to contemporary designers Giambattista Valli, Elie Saab and Maison Margiela, as well as smaller labels purely focussed on haute couture who don't also create a ready-to-wear line.

Houses on the official schedule are labelled as “haute couture member” “corresponding member” or “guest member”.

Guest members are newly recognised names, like Juana Martín. Once they have shown for four consecutive season, they are eligible to become a member and to call themselves a “haute couture” designer.

Corresponding members are full members who are not French. The Fédération is keen to promote France, and more specifically Paris, as the home of haute couture, though, of course, talent can come from anywhere in the world. This season’s corresponding members are Iris van Herpen and Viktor & Rolf from The Netherlands, Giorgio Armani and Fendi from Italy and Elie Saab from Lebanon.

In recent decades, the Fédération has also acknowledged that couture talent can also include exceptional use of technology in the craft, as is the case for Iris van Herpen whose creates items including 3D printing, electromagnetic weaving, biomaterials and other innovations that push the boundaries of dressmaking.

Designers and the audience taking part are noticebly different at the ready-to-wear shows which take place in Paris at the end of February and September. While ready-to-wear designers will invite buyers to their shows in the hope of placing orders with luxury department stores and boutiques, couture week is attended by ultra wealthy individuals who will place orders directly with the designers for themselves.

Prices for a single piece typically start at around €10,000 and can reach hundreds of thousands. It is estimated that there are around just 4,000 customers for haute couture. They range from royalty to heiresses to elite businesswomen and celebrities.

The future of an industry reliant on such a small customer base that doesn't cater to the instant gratification of modern life has often been brought into question. Following the disruption of the pandemic, luxury now faces new challenges with the war in Ukraine and a tumultuous global economy. Haute couture will have certainly lost business from blacklisted oligarchs and Russian designer Valentin Yudashkin was removed from this season’s schedule.

However, haute couture has proven across the many ups and downs of the 20th century that it has staying power, not least because the number of super wealthy people has increased drastically. It’s widely considered that John D. Rockerfeller became the world’s first dollar billionaire in 1918.

Today, there are 2,668 billionaires in the world according to Forbes and where there’s wealth, there are various ways to spend it.