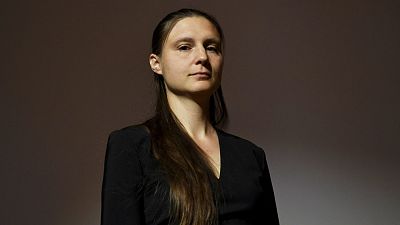 A Ukrainian professor has become the second woman ever to win a prestigious Fields medal, one of the most highly-coveted awards in mathematics.

“Whenever we have something good in our lives, often we take that for granted,” the 37-year-old told the International Mathematics Union.

“And peace is what I always took for granted. Now I understand how wrong I was about that.

Today, the Kyiv-born mathematician received the prestigious Fields medal for her work on the “sphere packing” problem - the question of how to pack spheres in eight dimensions to take up the least space.

Professor Viazovska - who is based at the Swiss Federal Institute of Technology in Lausanne - is only the second woman to win the medal, which is presented to four mathematicians, aged under 40, every four years.

This year, medals were also awarded to Professor James Maynard 37, from Oxford University, Hugo Duminil-Copin, 36, of the University of Geneva, and June Huh, 39, of Princeton University.

What is the sphere packing problem?

Mathematicians have puzzled over the sphere packing problem for years.

The problem is also known as the ‘orange stacking problem.’ Put simply, it relates to how to pack spheres - or oranges - in the densest possible way.

“You have a big box, and you have an infinite collection of equal balls, and you’re trying to put as many balls into the box as you can.”

The problem was first theorised in the 1500s, when Sir Walter Raleigh wanted to work out the number of cannonballs in a pile.

If you pile spheres, oranges or cannonballs in a pyramid, you’re packing them in three dimensions - length, height, and width.

Professor Viasovska’s formula solves how best to pack spheres in eight dimensions, in a shape known as an e8 lattice.

Her proof - which took 13 years to formulate - has blown open the geometry of spheres.

“What we are doing, of course, it’s shaping the future, maybe it will be used a hundred years from now so it’s still important,” Professor Viasovska said.

How the war in Ukraine threatens maths

Professor Viazovska found out about the award in February, just weeks before Russia invaded Ukraine.

At today's award ceremony, the academic paid tribute to Yulia Zdanovska, a young mathematician who studied under the same teachers she had in Kyiv. Zdanovska was killed by a Russian missile attack on the Ukrainian city of Kharkiv in March.

"Yulia was a person filled with light, and her big dream was teaching mathematics to kids in Ukraine," Viazovska said.

The war has also threatened Professor Viazovska's parents and sisters, who were trapped in Kyiv when war broke out.

Amid the uncertainty of the conflict, the professor took solace in her teaching.

“When the war started I could not think about anything else including mathematics,” she said.

“During those first days I realised how much I love teaching. When I’m in from of the class I have to forget about everything else because I have to be very focused,” she says.

“This made me to forget about this fear and pain inside myself.”

The academic’s sisters are now staying with her in Switzerland, waiting for the day when they can return home. Professor Viazovska hopes to join them.