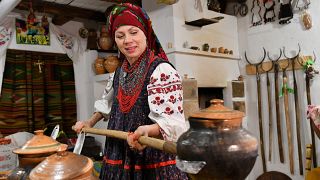 Borsch is a dish eaten all over Eastern Europe but is now recognised as an endangered Ukrainian dish due to Russia's invasion   -   Copyright  Genya Savilov/AFP
By Tim Gallagher  •  Updated: 04/07/2022

The United Nations' cultural agency, UNESCO, has put Ukraine’s national dish, borsch, on to its endangered heritage list because of Russia’s invasion.

The soup, which is a warming dish of cabbage and beats, was added to the list of cultural traditions “in urgent need of safeguarding” last week.

The move was welcomed by Ukrainian officials, who applied to have borsch added to UNESCO’s list in 2020.

"The victory in the war for borsch is ours!" Ukraine's Culture Minister Oleksandr Tkachenko said on Telegram upon hearing the announcement.

However borsch (spelt borscht in English) is eaten all over Eastern Europe and also in Russia.

“Our borsch has no need of safeguarding but should be subject to immediate and complete destruction on the plate,” said Russia’s Foreign Ministry spokeswoman, Maria Zakharova, in her own Telegram post.

“Humus and plov (pilau) have been declared the national dishes of several nations. But as I understand it, everything is subject to Ukrainisation. What’s next? Will pork now be declared a Ukrainian national food?” she further criticised.

The origins of the soup can be traced back to Kyivan Rus’, an ancient kingdom that predates modern Russia and Ukraine and encompassed areas of eastern Europe and the Nordic countries.

UNESCO was careful to avoid implying the dish is exclusive to Ukraine and noted there are a variety of recipes which include meat and fish.

The move comes amid intense fighting in the eastern Donbas region of Ukraine and as the Ukrainian army has withdrawn from Lysychansk.

UNESCO said that borsch is threatened due to displacement of recipe bearers from their communities, disruption of cultural life, and the destruction of the environment preventing access to ingredients.

“The viability of the element, however, is threatened by various factors since the beginning of the armed conflict in February 2022,” said UNESCO.

The organisation describes preparing Borsch as a practice that passed on between generations and dates back hundreds of years.

The dish is used ceremonially in areas like the region of Podillia where on the third day of a wedding, called nevistky - na borshch, the family visit their new daughter-in-law to eat borsch together.

The soup is found in folk tales and proverbs across Ukraine.

However, despite other nation’s claims Tkachenko’s post on Telegram declared the soup to be "officially" Ukrainian.

"Remember and be sure: We will win this war like we did the war for borsch," the Culture Minister said.