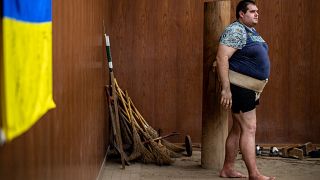 A team of six Ukrainian sumo wrestlers whose training was interrupted by Russia's invasion will soon be heading to the US to compete in the World Games 2022.

The World Games is an international multi-sport event organised with the support of the International Olympic Committee.

This year around 3,600 elite athletes from over 100 countries will be competing for gold.

From Ukraine to Japan

The Ukrainian sumo team have been busy training in Japan, the home of the ancient wrestling sport, in preparation for the competition. They have held training camps in southern Oita and Ehime prefectures.

Previously, the athletes trained in Kharkiv, however, they were forced to leave when Russia invaded and the city came under heavy bombardment in late February.

"It is horrible what is going on in our country. People are dying, the infrastructure is being destroyed, sports complexes are being destroyed. Rockets are falling all over the country, no place is calm," said Ivanna Berezovska, a member of the Ukrainian sumo team.

Berezovksa won a silver medal in the open weight category at the 2017 World Games and is one of two women currently in the Ukrainian team.

Ukraine has been one of the most successful countries in the sport of Sumo since it made its debut in the 2005 World Games. It's estimated around 3,000 people in Ukraine are involved in the sport of sumo wrestling.

This year, athletes from Russia and Belarus have been banned from competing in the World Games but Ukrainian coach Liubov Korobko said she believes '"sport and politics should not mix".

"I think there are a lot of athletes in Russia who are against this war," she said.

"I think it would have been a good place for their athletes to tell us their opinions as friends and express their desire for peace," added Korobko.