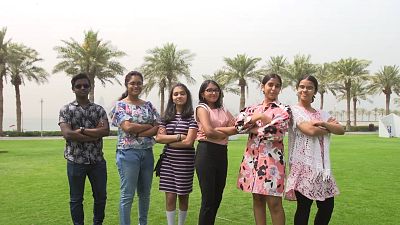 A group of seven high school students in Doha are on a mission to tackle fast fashion   -   Copyright  Richard Ballan
By Nazneen Zahan  •  Updated: 05/07/2022

A group of seven high school students in Doha are on a mission to tackle fast fashion. Alongside their studies and bountiful extracurricular activities, the teens have launched the non-profit Project Upcycle. A teen-led organisation dedicated to promoting sustainability and reducing fabric waste.

"Fast fashion is an industry. It's a concept that moves really quickly, and people don't really realise how much of a carbon footprint they're leaving behind," Ivana Thomas, head of communications at Project Upcycle, tells Scenes. "We buy products. We buy clothes. We like it because of the design, the colour, things like that. But nobody really sees what goes behind all of this," she adds.

The 13 to 15-year-olds met for the first time when they took part in the Global Act Impact Award (GAIA) for Model United Nations. The GAIA competition challenges schools to develop a service project that meets a UN Sustainable Development Goal and its indicator.

In just a few weeks, the teenagers came up with an idea, won second place and kick-started their non-profit organisation. "Everyone came with their ideas. There was no partiality, and everyone heard each other's ideas. Every person had a talent," says Paridhi Gaur, social media specialist at Project Upcycle. "We were like, let's head into the fashion line because we all love fashion. We won second place, and then we thought, you know, why not continue? Why not create an impact in this society?" adds Ivana.

Project Upcycle collects discarded clothes from the community, designs and upcycles them into bags, face masks and hair scrunchies. They work with a local tailor to turn their designs into products. The organisation then collaborates with EcoSouk Qatar, an eco-friendly online marketplace, to sell its merchandise.

The teens appoint all team member's roles while setting up the company so that every department would be staffed from finance to product design and social media. "I honestly feel like this has actually changed my life before. I used to be completely lost, just studying and playing. Being a part of Project Upcycle it's developed my communication skills. I never used to talk. I was always an introvert before. They gave me a responsibility, and if I am responsible for something, I have to do it. So that's why I love my team," says Prashansa Oruganti, head of social media at Project Upcycle.

The fashion industry is a €2.8 trillion behemoth that includes everything from clothing to bags, shoes to sportswear. However, the big moneymaker is fast fashion: the rapid production of clothes sold at rock bottom prices. The market is flooded daily with thousands of new designs, making it a lucrative industry, but it all comes at a high environmental cost.

The fashion industry is the second-largest industrial polluter after aviation and accounts for up to 10 per cent of global pollution, according to a 2021 study by Aalto University in Finland. According to the report, the industry produces over 92 million tonnes of waste a year, much of which ends up in landfills or is burnt.

"I think it was from the project that we kind of realised how much this needs to exist. Hopefully, what we're doing, our Project Upcycle, will really create an impact by creating a culture of being able to reuse," says Nandani.

Advocating to address the upcycling culture gap, the teenagers are focusing on not just producing eco-friendly products but also on changing people's habits towards the fashion industry across Qatar.

"Usually people are like, 'Oh, this is all flawed, why do I want this, this is second hand?' It's very hard to change their thoughts or mindset, which is one thing we're aiming at right now. It is a long way to go. It's very hard, but we're optimistic that we can do it," states Ivana.

"So if we're all doing our part and if we're all trying our best, it doesn't have to be something huge. It can even be like the smallest of things, the most simple daily things. If that extra step is taken, that extra step could account for a better future for all of us," adds Nandani.