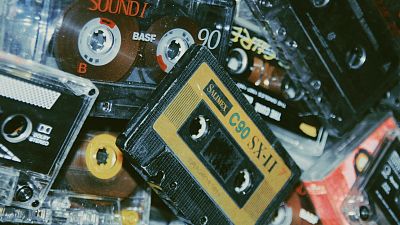 It all started for Soren Gray when he bought a new car in 2009. New to him. The car itself was a Ford Thunderbird from the 60s.

Built in 1967, it exuded the classic muscle car charm, with one slight problem - it didn’t have a stereo.

Unwilling to drive around the hipster Silver Lake neighbourhood of Los Angeles without some tunes playing out, Gray bought a boombox and headed to a Hollywood record shop to stock up on cassette tapes.

“I love the fatter sound that tapes give,” Gray says.

“I play them in my car when I drive, which you can't do with records. And the lows are bassier and the highs are more crisp than when I play the same album through Spotify or iTunes,” he claims.

“It's actually kinda my fault tapes became cool again,” Gray suggests. “When I started collecting them, everyone thought I was crazy, but I saw how collectable the 'dead' format was and dove in.”

While there's no proof Gray began a cassette revival, he was right about them becoming collectable items. Fast forward to the 2020s and there is a sizeable community of people who love discovering and listening to music on tapes.

“I had been collecting records for over a decade and had most things on vinyl, but didn't have them on tape! So my collecting obsession refocused on tapes and here we are 2,000+ tapes later!” Gray adds.

Gray has also set up his own label, High Bias Records, where he sells tapes of his own music and bootlegs of King Gizzard & the Lizard Wizard albums.

Tapes got an additional boost in recent weeks, as Kate Bush's 1985 song 'Running Up That Hill' was featured in an episode of the Netflix series Stranger Things, where the cassette format is part of the storyline.

Now tapes of her music are going for record amounts. Gray owns a near-mint copy of her 'Hounds of Love' album in a limited-edition pink marbled cassette that could sell for around $200.

Another tape collector who’s making the most of the Kate Bush revival is Marie Stutz.

Co-owner with her husband of The Current Year, a vinyl record shop in Cleveland, Stutz has seen Kate Bush tapes go for well over $100 since the Stranger Things episode.

When the record shop first opened in 2020, first cassettes weren’t popular but demand quickly increased and now The Current Year has a stock of almost a thousand tapes.

Stutz explains that while 80s and 90s rock is the most popular, they’ve also carved out a niche in supplying imported Japanese vinyl and tapes. “We were the only store on this continent to import Linn Mori's cassettes direct from Tokyo,” she says, proudly.

In the UK, Graham Brownlie has run Get Tapes Here, a company which does 'all things tape', since the 80s.

After the release of CDs, the company shrank significantly and found its biggest market was releasing audiobooks for the blind and prison tapes - a kind of transparent cassette that can be taken into penal institutions, as it can't be turned into a weapon - unlike CDs or vinyl records.

“Since the pandemic, and then the resulting polycarbonate shortage, cassette tapes have exploded for us in all aspects of audio," Brownlie says, referring to the vinyl industry's struggle to meet demand. "We have tripled our staff, and have an output that rarely allows us a day off,” Brownlie adds.

Now many of today’s biggest artists are releasing their latest works on tape. Everyone from Billie Eilish to Lady Gaga has cassette releases alongside re-issues of long-lost punk albums and classics from metal and hip-hop genres.

“Cassettes are unique for two reasons,” Brownlie explains. The first is the physical experience. Unlike a digital copy of a song, holding a tape can physically evoke emotion either from nostalgia or newness, he says. But secondly, it’s the affordability and speed of them.

“It allows artists of all types to release physical copies at affordable prices, and within a decent delivery time, especially when compared to vinyl wait times of at least 8 months,” Brownlie explains.

For Luke Owen, label manager at Kudos Records and Death is Not The End, this affordability is key.

While Vinyl has surged in popularity, it’s only really feasible for bigger established artists, he explains.

“If you're a small artist or small label and you do the minimum press of 300 records, you’ll spend about two grand in the process. And I'll be honest with you, there's no guarantee that you're going to break even on that,” Owen says.

As both the cost of vinyl and the cost of living rise, Owen suggests many music lovers who want physical copies can’t afford to splurge on a record anymore.

The ease of recording onto cassette opens up opportunities for smaller bands, without mainstream appeal, to grow a fanbase. The physicality of tapes also helps independent bands get noticed better.

“If you’re an emerging indie artist, especially if you’re somebody who’s making music that’s challenging and not widely popular, you’re only option is to put out a digital release,” Owen says.

“But given the nature of digital music, and the internet as a whole, is a complete ocean, there’s not really anything to differentiate yourself in that market,” he explains. The physical cassette acts almost like a business card as it sits in a record shop.

The issue of cassette sound quality

While Owen says that there still isn’t enough interest in tapes for distributors to come knocking for most releases, the direct-to-consumer market is thriving.

“There's a reputation of being crap audio quality,” Owen says. “Of course, if you’ve left your Beach Boys album in your car in the sun for too long it’s going to sound bad, but the quality actually depends more on the dedicated time an artist has put into recording.”

Audio experts would argue that tape's lower range and background noise inherently make it the 'worst' format for music out of digital, CDs or vinyl formats but this seems to be secondary to enthusiasts who focus on cassettes' other qualities.

Added to its accessible price and throwback style is the fact that any person can record over a tape with a new track, giving it a DIY, grassroots charm.

And for many, the resurge in popularity has just given them a renewed opportunity to indulge in nostalgia for a simpler time in music.

“Growing up, that's really all we had that was easily portable,” says Steve Raines, a cassette collector.

“Now that I'm older, I look back and realise some of the greatest memories I have included using cassette tapes. Whether it was breakdancing on the corner or going for a drive with the parents, I always had the newest tape in my pocket ready to play,” he recalls.