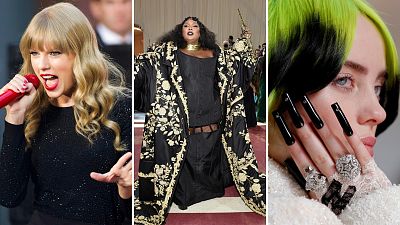 Taylor Swift, Lizzo, and Billie Eilish have all publicly criticised the new anti-abortion decision from the US Supreme Court   -   Copyright  AP Photo
By Jonny Walfisz  •  Updated: 27/06/2022

Many American musicians have expressed their dismay in recent days, after the country's Supreme Court overturned 1973 Roe v Wade, ending a 50-year-old constitutional right to abortion in the United States.

The Supreme Court decision was openly criticised by key figures in US culture. Here are some of the biggest names who have spoken out in the past few days.

The ‘Queen of Pop’ was quick to comment on Instagram, writing, “I woke up to the terrifying news that Roe V Wade had been overturned and that. Legislation has decided that We no longer have rights as women over our bodies. This decision Has plunged me And every other woman in this country into deep despair.”

“I am scared For my daughters. I’m scared for all women in America. I am just plain scared,” she continued.

Taylor Swift reposted Michelle Obama’s statement of 'heartbreak' and added, “I’m absolutely terrified that this is where we are.”

“That after so many decades of people fighting for women’s rights to their own bodies, today’s decision has stripped us of that,” the musician added.

The decision was announced as the UK’s biggest music festival, Glastonbury took place. With many huge American music acts present, many artists made pro-choice statements.

Billie Eilish, in her headline set, told the festival attended by 200,000 people that, “Today is a really dark day for women in the US and I’m just gonna say that ’cos I can’t bear to think about it any longer in this moment.”

Phoebe Bridgers, who also performed at the festival paused her set to say “I’m having the shittiest day.”

She then had her crowd shout “F*ck the Supreme Court” in unison. Bridgers has been a vocal critic of the court's ruling. When the decision was first leaked in May, Bridgers tweeted about her experience having an abortion last year.

“I had an abortion in October of last year while I was on tour. I went to planned parenthood where they gave me the abortion pill. It was easy. Everyone deserves that kind of access,” she wrote.

Olivia Rodrigo brought out UK singer Lily Allen to cover her song “F*ck You” in her set. The song was aptly directed at the judges who wrote the decision.

“I wanted to dedicate this next song to the five members of the Supreme Court who have shown us that at the end of the day, they truly don’t give a shit about freedom. The song is for the justices: Samuel Alito, Clarence Thomas, Neil Gorsuch, Amy Coney Barrett, Brett Kavanaugh. We hate you! We hate you,” she said.

At the end of the festival, rapper Kendrick Lamar closed out his headline set with an emotional finale. Wearing a glittering crown of thorns dripping with blood, he shouted “They judge me; they judge Christ. Godspeed for women’s rights,” until his voice went hoarse and he left the stage.

Lizzo and Rage Against the Machine

“I’m pledging $500k from my upcoming tour to Planned Parenthood and Abortion Rights. Live Nation agreed to match— to make it 1 MILLION dollars,” she tweeted.

A similar donation came from protest rock band Rage Against the Machine. They posted a message on Instagram stating they are “disgusted by the repeal of Roe V. Wade and the devastating impact it will have on tens of millions of people.”

“Over half of the country (26 states) is likely to ban or seriously restrict abortion very soon, if not immediately, which will have a disproportionate impact on poor, working-class and undocumented BIPOC communities,” they wrote.

“To date, our fans have raised $475,000.00 from the sale of our charity tickets at Alpine Valley and the United Center. We are donating that money to reproductive rights organisations in Wisconsin and Illinois.”

“Like the many women who have organised sophisticated railroads of resistance to challenge these attacks on our collective reproductive freedom, we must continue to resist.”

A post shared by Rage Against The Machine (@rageagainstthemachine)

Making VR worlds from the comfort of home

'Sad statistics': How Ukraine's culture is being destroyed by war