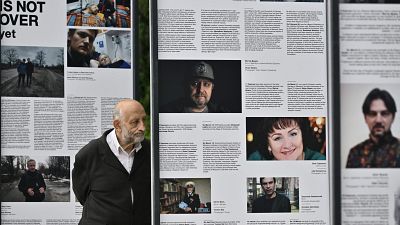 Journalists killed or wounded during Russia's invasion of Ukraine are being honoured in an outdoor exhibition in Kyiv, months into Moscow's war.

"The war continues, the war is not over. And this is a war in which our citizens are dying, in which Ukrainian and foreign journalists are dying," said Tetyana Teren, executive director of PEN Ukraine, one of the organisers of the exhibition.

"That is why we ask foreign media to tell the truth about this war and continue to tell the world about Russia's crimes in our country," she added.

Portraits of reporters and media workers who have become victims of the conflict stare down at passers-by from large black and white boards in the capital's centre.

The exhibition is entitled, "The War Is Not Over Yet" and was organised by Kyiv city authorities with help from human rights and press advocacy groups.

"The Russian occupiers killed the American journalist, director and producer Brent Renaud," one of the large panels installed in a central park reads.

Renaud, who died on 13 March, was the first foreign journalist to be killed by Russian forces after the invasion on 24 February 2022.

Other journalists who have lost their lives during the war, include Franco-Irish Fox News cameraman Pierre Zakrzewski who died on 14 March alongside Ukrainian news producer Oleksandra Kuvshynova.

Their vehicle was struck by incoming fire, injuring correspondent Benjamin Hall, in Horenka outside the Ukrainian capital.

French journalist Frederic Leclerc-Imhoff, died on May 30 accompanying civilians on board an evacuation bus in the east of Ukraine.

"Now that four months have passed since the beginning of the full-scale invasion, it is more important than ever to intensify the world's focus on Ukraine," the organisers said in a statement.

"This exhibition is an expression of solidarity with Ukrainian media professionals who fight for the truth, risking their own lives,” they added.

According to CPJ (the Committee to Protect Journalists), 35 journalists and media workers have been killed in Ukraine since the start of the war.