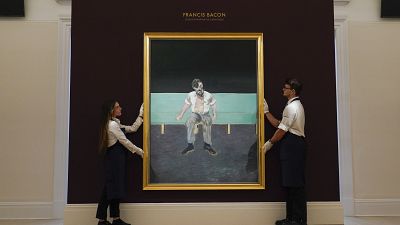 Members of the staff hold 'Study for Portrait of Lucian Freud' by Francis Bacon at Sotheby's, in London   -   Copyright  Alberto Pezzali/AP
By Theo Farrant  with AP  •  Updated: 23/06/2022

A portrait of Lucian Freud painted by Francis Bacon is being sold at a Sotheby's auction in London.

The long-unseen portrait painted by the figurative artist is worth an estimated £35 million (€40.7 million).

Bacon is best known for his bleak, raw and emotional interpretations of the human condition.

His work is also characterised by the influence of his meticulous study of the human anatomy, which resulted in paintings that seem to overlay portraits and anatomical drawings.

The artwork, painted in 1964, is a snapshot of the relationship between Bacon and Lucian Freud.

"So what we have here is really the two titans of British art in the last 100 years, Bacon and Freud, intertwined into this one canvas," says Tom Eddison, Senior Director in Contemporary Art, Sotheby's. "Now Bacon and Freud had known each other since about the mid-1940s, through an introduction of Graham Sutherland ... So what we see here, 20 years later, is the culmination of a budding relationship, a friendship, a rivalry in artistic terms."

Unseen by the public for decades

The two men had a long but fraught friendship, which ultimately ended in the 1980s after a string of arguments.

The portrait has lasted longer than their relationship - but this is the first time in decades it has been seen by the public.

"This is an incredibly rare painting at auction. It was painted in 1964 and then it went on exhibition in Hamburg, in Stockholm and then latterly in Dublin in 1965 and it hasn't been seen in public since that date," says Eddison.

"It's been prized in a private collection since its execution. So we're incredibly privileged to bring this to the market for the first time."

What other artworks is Sotheby's selling?

As well as Bacon's Lucian Freud portrait, there are also works from Banksy, Andy Warhol and Claude Monet being sold by Sotheby's.

Banksy's take on Winston Churchill as a punk in 'Turf War' is expected to fetch as much as £6 million (€7 million).

Claude Monet's Impressionist landscape of the village Vétheuil is expected to go for up to £15 million (€17 million) while this Parisian scene by Renoir has an estimate of £4 to 6 million (€4.6 - 7 million)

Other standout works include a self-portrait by Andy Warhol, 'Woldgate Woods II' by David Hockney and 'Lightness of Being' by Chris Levine.

British Art: The Jubilee Auction and Modern and Contemporary Evening Auction will be held in London on 29 June.