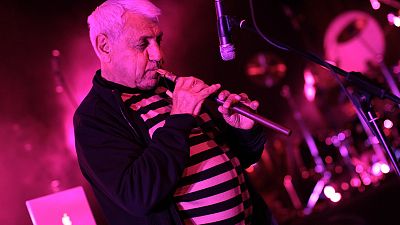 Djivan Gasparyan was an Armenian musician and composer. He played the duduk, a double reed woodwind instrument related to the orchestral oboe.   -   Copyright  Sebmarouani (CC 3.0)   -   Wikimedia
By Joshua Askew  •  Updated: 21/06/2022

Since its inception forty years ago in France, the Fête de la Musique, known in English as World Music Day, has become something of an international sensation.

The celebration of all things musical takes place on 21 June in more than 700 cities across 120 countries -- from Brazil to Japan and everywhere in between.

Founder Maurice Fleuret started World Music Day to praise "the music everywhere and the concert nowhere," so without further a do let's look at some of Europe's most fascinating musical practices.

Spoiler: There are bagpipes on this list — but they don't come from where you think

The duduk, or Armenian oboe, is a delicate wind instrument made from the soft wood of apricot trees.

Played in various guises in Azerbaijan, Turkey, Georgia and Iran, it produces warm, soft, slightly nasally music, which can be both sad and mysterious.

The roots of Armenian duduk music stretch back to the times of ancient kings, with some scholars suggesting it is around 1,500 years old.

Many Armenians consider duduk music, which is often played in pairs, as the most eloquent expression of warmth, joy and their history.

According to Dr Jonathan McCollum, the instrument is "actually the only truly Armenian instrument that's survived through history, and as such is a symbol of Armenian national identity."

Despite this, the popularity of duduk music has faded in Armenia over the last few decades, especially in the rural areas where it originated.

Lively, impromptu and loud — Tsiattista is Cyrpus's time-honoured version of the rap battle.

It is a poetic duel performed to the sound of the violin or lute in which poet-singers attempt to outdo one another with fiery verses and rhymes in "jousts".

A Greek-Cypriot tradition, Tsiattista has long been a popular feature of weddings, feasts, fairs and other festivities, where eager crowds egg performers on.

To succeed under the stage lights, poets need quick wit, deep familiarity with Cyrpus's musical and poetic traditions, a rich vocabulary and vivid imagination. The competition can be fierce.

Most of the art's heavyweights are older men but these days a talented generation of young female poets are making waves.

Looks like bagpipes aren't the province of Scots, after all.

A rich bagpipe tradition exists in Slovakia too, containing not just their own unique musical numbers but dances, instrument-making techniques, styles and special accompanying lyrics. (Yes you can sing over bagpipes).

Although there are many regional differences, the rousing wails of bagpipes can be heard throughout the small eastern European nation. In fact, bagpipe culture is a hallmark of Slovakia's traditional folk culture.

Using instruments made from the skin of a goat, bagpipe players often perform alongside an eclectic mix of other musicians, singers and dancers in large groups.

Slovak communities are often proud to count a bagpipe player among their ranks and when they attend social events, the ear-catching music often helps forge a sense of shared belonging.

While it may not be on the European continent, Greenland is geopolitically part of Europe so we've included the island's traditional Inuit drumming and dancing on this list.

Performed either solo or in a group, this music enlivens national holidays, festive celebrations and social events on the Arctic island.

In a finely tuned technique, drummers bend their knees, lean forward and strike the instrument, or qilaat as it is known, with a bone or piece of wood, producing a sharp, echoing, percussive beat.

These melodious and monotonous sounds are usually narrated with lyrics which touch on islanders' love, longing, humour and hunting.

For Greenland's Inuits, drumming and singing embody their shared identity and create continuity between the past and the present.

Drumming practices are seen as symbols of equity and equality in Greenland. They are universally recognised as belonging to everyone, regardless of age, gender, social status or political views.

The Baltic's rich tradition of folk music comes together in large-scale festivals once every five years in Estonia and Latvia and every four in Lithuania.

These grand events, held over several days, bring in as many as 40,000 singers and dancers, with participants typically belonging to amateur choirs and dance groups.

Their repertories reflect the expansive range of musical traditions in the Baltics, from the ancient folk songs to contemporary numbers.

The celebrations sprung from the choirs and musical ensembles which were first formalised in Estonia during the eighteenth century, soon spreading throughout rural and urban areas.

As the Baltic states tried to squeeze out a semblance of independence from Russia after the First World War, the events became very popular as a way of asserting Baltic cultural identity.

Yet, they could not escape the clutches of the USSR for long and were soon incorporated into communist ideology.

Since regaining independence in 1991, the Baltics have undertaken various measures to protect this tradition. However, faced with major economic and social changes taking place in the region, there are serious concerns for the future.

Today’s principal threats stem from the rural exodus and the resulting breakup of local amateur groups.