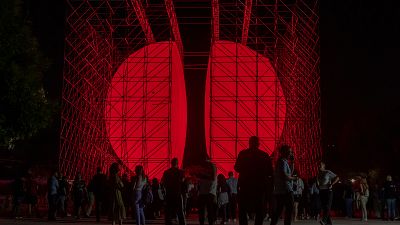 “We are having the time of our lives” reads an ocean-blue illumination just inside the entrance to the largest public park in Athens, Pedion tou Areos, the temporary home to Plásmata, a digital art exhibition of giant proportions.

Placed steps away from a monument to King Constantine I, the sign – courtesy of Danish artist group Superflex, and reminiscent of garish commercial billboards – seems to strike a sarcastic tone. Bombarded as we are with such advertising, tailored to us via powerful algorithms and full of clichéd platitudes, what choice do we have but to believe it?

Commissioned and produced by Onassis Stegi and curated by Future Everything, Plásmata is Europe’s largest open-air digital art exhibition. The show picks up from last year’s edition, “You and AI: Through the Algorithmic Lens”, which explored how algorithms impact and reshape society and our perception of the world. This time, the experimental exhibition seeks to probe the notion of the body – whether it be individual or collective, human or non-human, or planetary – and its interaction with technology.

As well as meaning 'creatures' in Greek, ‘plásmata’ comes from the root ‘plasso’, meaning to fabricate or mould – as such, the 25 new large-scale works explore how we use data to create different types of creatures and identities, to fabricate and re-fabricate versions of ourselves.

Among the works addressing the intervention of technology into human bodies – and, it seems, sounding an alarm against it – is ‘Happiness’ by Dutch theatre-maker and visual artist Dries Verhoeven. In this installation, a humanoid robot mans an abandoned pharmacy, telling visitors about the various drugs, antidepressants and painkillers that can alter and improve their emotional reality.

“It is a sign of our time that, in our longing for happiness, we increasingly place our hopes in the artificial domain, in AI, drugs and other substitutes for nature,” Verhoeven tells Euronews.

Other works, however, strike a more optimistic tone. At first glance, Spanish artist SpY’s ‘Divided’ seems to speak of separation; a huge, red, illuminated sphere, evoking the earth, is split into two halves.

“By portraying a divided earth I try to suggest how differences could be understood not as a form of separation, but rather as a quality, the quality of complementarity,” says SpY.

The artwork, he explains, is a response to the way that “algorithms have taken over many aspects of our lives”.

“Where there was focus, we now have distraction, automatic reactions instead of reflection,” he posits, “and, even more importantly, confrontation and isolation have taken the place of empathy.”

Visitors can walk through the light-filled corridor between the semi-spheres, becoming part of the artwork themselves and experiencing what SpY describes as “a moment to escape this new reality”, engaging in a rare moment of togetherness. “The new digital reality may be widening the gap between all of us, but we are still part of one single being,” he reflects.

These themes are taken up by Seoul-based collective Kimchi and Chips, whose light installation ‘Another Moon’ sees sunlight collected by solar cells during the day, and projected back into the sky at night to create an artificial moon hovering 70m above the ground. Visible up to 1km away, ‘Another Moon’ creates a point of focus, connecting people in physical space – in contrast to the separation imposed by the coronavirus pandemic, and the digital solutions that took the place of physical interaction.

Alongside the artworks, digital video channel NOWNESS is curating an algorithm-free screening of short films at the park's former amphitheatre, disrupting the digital platform's usual practice of serving up personalised content determined by an algorithm – returning viewers to a collective viewing experience instead.

This collectivity is reinforced not only by the show being free and open to all, but by its specific location in a public park. Pedion tou Areos started out as an army training ground, and is now the Greek capital’s largest public park.

“How can you resist meeting each other, being together, experiencing the magic of the crowd? That’s why we cherish Pedion tou Areos. Because there you realise what a city means ... And no matter how different our starting points may be, there are common needs and desires that interconnect us,” says Afroditi Panagiotakou, Director of Culture at the Onassis Foundation, on the choice of Pedion tou Areos as the location for the exhibition.

Plásmata’s location in such a public space is aimed not only at creating a sense of connectedness, but also to bring into the public realm what Papadimitriou and Tsiavos describe as “urgent conversations” on the ethical questions surrounding AI, data and surveillance.

“These instances allow people to ask important questions ... Expand and extend the boundaries of public space and public discourse,” they explain.

Upon leaving the park, wandering out past Superflex’s luminous blue sign, maybe we’ll find ourselves asking the question: “Are we really having the time of our lives?”