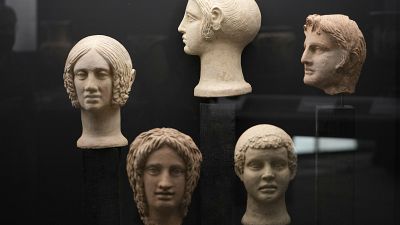 Votive terracotta heads and half-heads from the 3rd and 4th centuries B.C. are displayed in the new Museum of Rescued Art in Rome   -   Copyright  AP Photo
By Theo Farrant  with AP  •  Updated: 16/06/2022

Around 100 stolen artefacts recovered by police are going on display in a new museum in Italy before being returned to their rightful homes.

The priceless exhibits were hunted down by a specialist unit and traced to locations in the United States.

"The 'Rescued Art Museum' was born out of a specific need: to finally return to communities and the public these masterpieces that have often been stolen, through illegal digs, and ended up abroad, and have never been seen in Italy," says Massimo Osanna, director of Italy's state museums.

"Objects seized are often then returned to storage, kept indoors, and so the idea is to create a dedicated space with an evocative name, the 'Rescued Art Museum'.

What's currently on display at the Rescued Art Museum?

The opening exhibition includes artefacts selected from about 260 works stolen over the past 50 years from various regions in central and southern Italy and dating from between the 8th and 4th centuries BC.

"These are very ancient pieces from pre-Roman Italy. Some are real masterpieces like this one behind me which is a jar, a 'pithos' with one of the oldest depictions of the myth of Ulysses and Polyphemus," says Osanna.

The large Etruscan 'pithos' (jar) is made of red pottery and shows the mythological scene in which Ulysses and his companions blind the one-eyed giant Polyphemus, an important testament to the influence Greek civilization had on the Etruscan one.

The jar comes from Caere, a very ancient city in Etruria that corresponds to today's Cerveteri, a small town an hour from Rome.

The jar will return to its home in October, when these artefacts will be replaced by other recovered pieces.

How were the artefacts recovered?

The stolen goods were recovered in operations conducted by the Carabinieri unit for the Protection of Cultural Heritage in cooperation with US authorities.

The unit was established in 1969 and conducts investigations into illicit trafficking in cultural goods, fakes, and clandestine excavations.

They were found in museums, auction houses and private collections, and returned to Italy on 15 December 2021.

"The Carabinieri unit for the Protection of Cultural Heritage has extraordinary finds in storage ... There are operations underway that will recover (other works) in the coming months. And so in the coming months we will decide what will be the (next) works (on display)," says Osanna.

The special unit of the Carabinieri is cracking down on looters all over Italy who dig for ancient artefacts to resell, as they have been doing for decades in Pompeii.

In 2021 the special Carabinieri unit recovered 23,363 archaeological and paleontological goods.

The "Illicitly Misappropriated Cultural Property Database" is the world's largest database of stolen works of art, which now has 1.3 million searchable files.

Thanks to this tool, the majority of recoveries are made by searching the online catalogues of international auction houses, antique galleries, art fairs, online pages and social media.

The museum opens on 16 June in Rome and will be based within the National Roman Museum.