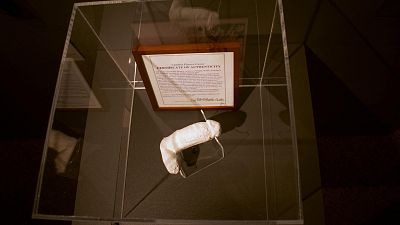 The Icelandic Phallological Museum in Reykjavik has gained a new member. Taking pride of place in the collection is the plaster cast of legendary American guitarist Jimi Hendrix’s erect penis.

The guitar virtuoso’s penis has been put on show after a private unveiling ceremony earlier this month.

The ‘Foxy Lady’ writer died tragically in 1970 after a drug overdose, aged just 27. But in his short life, he fit in a lot, releasing three albums and contributing to several other musicians' recordings.

Amid the rocking out, he also managed to find time to have a plaster cast made of his penis by artist Cynthia Albritton.

The version of Hendrix’s penis on show in Iceland is a near-perfect copy of an original made by Cynthia in 1968, when Hendrix was 25.

If you don’t believe it’s the real deal, a certificate of authenticity verifies it as authentic rockstar genitalia.

"It's certainly one of our most valuable pieces in terms of monetary value," Thórdur Ólafur Thórdarson, says deputy curator of the Phallological Museum.

“We are extremely lucky to have it,” adds the Chief Phallologist, a role only this museum has.

Before her death in April this year, Cynthia the Plaster Maker was persuaded by some of her neighbours who had visited the museum to donate the piece.

Hendrix is not the only exceptional penis that the museum has on show. The Icelandic Phallological Museum is home to around 400 appendages, from humans and the animal kingdom.

The museum was first opened in 1997 with a mere 62 penis specimens. It all started when founder Sigurður Hjartarson, born in 1941, was given a bull’s penis in 1974.

If you’re ever in Iceland, some of the best organs to check out include the penis of a raccoon immersed in formaldehyde and a collection of rare whale schlongs in plexiglass tubes.

Other animal penises on show include a polar bear and multiple kinds of seals and walruses.

There’s also a collection of bronze sculptures of the willies of the Icelandic handball team that won silver at the Beijing Olympics in 2008. Hard to imagine what they’d have put on display if they’d won gold.

While the Icelandic Phallological Museum is the only museum dedicated to penises, if you’re travelling and fancy some more phallic-themed fun, you should check out the annual Japanese festival Kanamara Matsuri.

Held on the first Sunday in April in Kawasaki, the “festival of the steel phallus” celebrates all things penis, with penis floats, penis lollipops, and endless penis costumes.

There’s also Rasputin’s penis on show in a pickle jar in St Petersburg, Russia. The infamous monk was known for his height and rumours around his bedroom activities.

Immortalised as “Russia’s greatest love machine” by singer Boney M, the 30 cm long penis is on display at the Museum of Erotica, although it's still disputed as to whether it actually belonged to him.