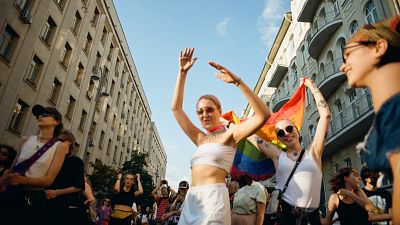 Over the last 30 years in Ukraine there has been a marked shift in attitudes to LGBTQ+ people.

The Nash Svit Centre, a group which was started by LGBTQ+ activists in the now-embattled Luhansk, say that pressure from below has resulted in a renewed focus from the Ukrainian government on LGBTQ+ rights.

While President Zelenskyy is keen to emphasise the liberality of Ukraine in the face of Russian aggression, many LGBTQ+ Ukrainians are concerned about the potential impacts the invasion will have on their burgeoning civil rights.

“Of course, this worries us,” says Yura Dvizhon, creative director of UKRAINEPRIDE, a queer patriotic movement which nurtures Ukrainian cultural identity at home and abroad.

“Russia comes to our land and wants to take it away, establish its own rules and take away the freedom that exists in Ukraine.

“People in Kherson, Mariupol or hundreds of other places occupied by Russia suffer.

“Of course, there are LGBTQ+ people in these cities and they need a lot of help, because being different in Russia is one of the worst and hardest things that a person can handle.”

Is it hard to be LGBTQ+ in Ukraine?

Dvizhon is one of a number of participants who are partaking in ‘LGBTQ+Me. Embracing Our Differences,’ a collaborative project between UKRAINEPRIDE and BetterMe, a global behavioural-health care company which is headquartered in Kyiv.

Research shows that depression, discrimination by family members, trouble sleeping, and feelings of hopelessness are all higher in the queer community. Launched on BetterMe’s Mental Health app this week, the project aims to help LGBTQ+ people around the world with their mental health.

Drawing on his own childhood experiences and the impacts these had on his mental health, Dvizhon is joining a host of other participants, all of whom will share their stories on ‘LGBTQ+Me’.

Advice from counselling professionals accompanies the stories which are available as audio on BetterMe: Mental Health.

“I find it cathartic to tell my story,” says Dvizhon who cites conformist culture in the USSR as a reason for the difficulty of being different in Ukraine.

“Growing up in Ukraine and being gay means a big fight within you in order to speak freely and openly with the world.

“I think I share it with the world to inspire people to become better. It may become easier for them to declare their orientation, or they can be more tolerant in perceiving the identity of another.”

Why is Pride month important?

As well as Dvizhon there are US-based contributors with links to Ukraine like actor and trans man Alex Budin and journalist Alem who is of Crimean Tatar descent.

LGBTQ+Me is intended for international use and is available in Ukrainian and English. Topics covered including identity, coming out, bullying, and stereotypes will be poignant for all queer people at this time of year.

LGBTQ+Me also aims to reach straight people by introducing them to different perspectives than their own. Ukrainian restaurateur Petro Zastavnyy is a straight contributor hoping to bridge the gap between communities.

One contributor, Pasha Lagoyda, is an LGBTQ+ activist who serves in the Ukrainian military and will lead a talk on LGBTQ+ people and military service.

Despite the difficulties still faced by the queer community in Ukraine, Dvizhon thinks things can get better, and that LGBTQ+Me can help in recovery from Russia’s invasion.

“The events taking place in Ukraine today make people reevaluate everything they believe in and answer the question "When, if not now?,” says Dvizhon.

“I personally know the stories when the guys, seeing the coming Russian military to occupy a town, start talking about their sexual orientation and gender identity with their relatives. At that moment, support is of crucial importance to them.

“LGBTQ+Me will definitely help everyone cope with their emotions and feelings and experience challenging events in life with less stress. Both LGBTQ+ people and heterosexual people, including those who are now under occupation, will be able to get closer to their relatives by talking about their sexual orientation or gender identity.”