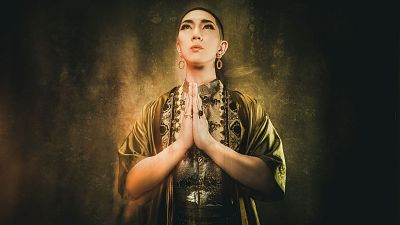 He grew up in a temple in Tokyo, where he always knew he was different from the other boys - he loved dressing up as Disney princesses.

Although both of his parents were monks, he did not want to follow in their footsteps as he believed Buddhism was incompatible with his own identity.

Seeking a place where he could fully be himself, he moved to the United States when he was 18 years old, and quickly fell in love with makeup.

He has gone on to feature on Netflix's hit show 'Queer Eye', gain a large social media following and build a celebrity makeup clientele consisting of the likes of Halle Bailey, Carson Kressley and Christina Milian.

Later in life, his desire to become spiritually stronger gave him the courage to embrace his Buddhist roots. In 2014, he returned to Japan and underwent Buddhist monk training.

Through his makeup work and Buddhist teachings, Kodo hopes to inspire people to embrace who they truly are.

To mark Pride month, we sat down with Kodo to discuss his work and his journey to self-love and acceptance.

What was your childhood like growing up in Japan?

When I was growing up in Japan I really liked role-playing as a Disney princess. And that's not the usual expectation people have towards little boys. So I knew that I was doing something very different from other people. And I knew that I should never say that I am attracted to other boys. This expectation was such a burden to me.

I was also really opposed to the idea of religion and Buddhism. I think it's because I was expected to become a Buddhist monk from my friends and people in the community so I was really rebellious.

As I grew older at the age of 18, I decided to go out of Japan, seeking a place where I could be myself, and that was the US.

What's your experience with gender identity?

I identify myself as gender-gifted. Sometimes people ask me are you gay or transgender? But personally I feel that my container, my body is male. I understand that. But what's inside me, my soul, doesn't necessarily have a gender. It's a gift that I've received – to think beyond the binary or LGBTQ category.

How did your life change when you moved to the United States?

After moving to the US I was able to come out to some of my closest friends first. And I kept seeing different representations of diverse people, especially biological men wearing makeup. It was so empowering.

I began studying art with students from all around the world. And I noticed that it's really important that you know who you are and show your authentic essence in your expression.

How did you get into make-up?

When I was born I was naturally interested in something beautiful. I was always taking my mother's skirts or fabric to make myself look like a princess. And I secretly played with makeup when I was in high school.

This first makeup products that I purchased was in Boston when I was 18. I bought my first mascara and eyeliner. And I was playing with my makeup and I felt like, 'Wow my eyelashes get so long'. If my face looks so different, my destiny will change too.

My confidence did not wash away when the makeup washed away. I felt that positivity, that confidence and a sparkle of hope.

That's when I felt that if I were to make other people feel more beautiful doing makeup, maybe it has more meaning for my life and I can also feel beautiful, and I can befriend people who see me for who I am without discrimination.

What are some of your career highlights as a makeup artist?

I have done makeup for one of my idols Carson Kressley, the original cast of 'Queer Eye' and now the judge of 'Ru Paul's Drag Race'. I was assigned to do his makeup during a Miss USA and Miss Universe pageant. And I was really happy because he was one of the first representations within the LGBTQ community that a person can be out and proud and also be celebrated on TV, which was not common at all in Japan.

I was also a part of Queer Eye. It's given me such amazing magic to my life.

Another person I really enjoyed doing makeup for was Halle Bailey. She is an actress and part of the singing duo, Chloe x Halle, who debuted from the production company of Beyonce. Halle is going to be acting as Ariel in the new live-action Little Mermaid movie. When I was younger I was always playing as Ariel and drawing the character, so for me to be able to do makeup for the real Disney princess was such a privilege.

Why did you decide to become a Buddhist monk later in life?

I feel like in order to touch someone's heart you really have to experience many things in life. And for me I was always avoiding and kind of denying the option to become a Buddhist monk. But I thought that if I was to face something that I always avoided, how would I be able to evolve?

I was really interested in finding out what Buddhism says about sexuality. What does it say about after death? And why do we have to be good people? In order to solve these questions I decided to join the monk training.

How did you find your monk training?

The monk training was really really tough. We had to wake up at 5:30 every morning and we went to bed at 21:30. We did ceremonies five times a day and we had to sit with our legs crossed and chant. I lost my voice and I was constantly coughing.

Was the Buddhist community accepting of your sexuality?

One thing that I really appreciate that I learned is that Buddhism is embracive of all people regardless of sexuality, race or your status. And it's something that was really surprising because I didn't think Buddhism would be so embracing and accepting.

When I came out to the Buddhist community they were surprisingly celebrating me. They hosted LGBT symposiums and they welcomed me to give a speech. And they also agreed to issue a rainbow sticker, which I designed, that can be displayed at the gates or bulletin boards of temples.

What would you say to someone on their own journey of self-acceptance?

I would like to say please do not feel inferior of your identity or your existence. As Buddhism says all the names that exist in the world mean just different letters, which means that the value of people is the same. So maybe people that are in higher status, people who make more money, people that have more followers, they might look like they are more valuable than you are, but as a human being we are all worthy equally.

What would you say to the leaders of the world?

There are more than 71 countries where they penalise LGBTQ people, and also there are leaders who do not know enough about LGBTQ people today. So if I were to talk about LGBTQ rights saying that I'm also a religious leader, I would like to expand their horizon and if they can somehow even just a little bit loosen the law against LGBTQ people I think it is something really meaningful.

You have recently published a new book, 'This Monk Wears Heels', what's it all about?

It's a self-help book for anyone who feels that they're different. I talk about Buddhist teachings that help me to liberate myself. I used to struggle with my homosexuality and the traditional image of a Buddhist monk. But by studying Buddhism I actually learnt that being different, being unique is something beautiful.

I also share experiences and some beauty tips that I learnt being a makeup artist. So it's a confidence booster from inside and out.

Supporting trans rights and podcasting: How Suzi Ruffell does comedy