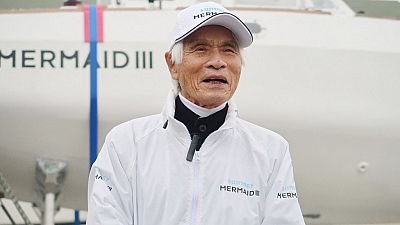 A Japanese man has become the oldest person ever to sail across the Pacific Ocean single-handedly, without stopping.

He arrived in the Kii Strait (western Japan) aboard a small pleasure boat on Saturday, having set sail from the United States (US) city of San Francisco on 27 March.

According to trip organisers, the return of the Japanese adventurer this weekend (4 June) made him the oldest person in the world to successfully cross the Pacific Ocean, alone without pause.

"I'm about to cross the finish line," Horie wrote on his blog Friday after what he called a three-day battle against cross currents in the earth's largest and deepest ocean.

But this is just the latest seafaring feat by the old Japanese sea dog.

In 1962, Horie crossed the Pacific at the age of 23, which at the time broke Japanese law prohibiting navigators from leaving the country under sail and entering the US illegally.

"I was constantly anxious and stressed about getting caught," he blogged in April, referring to the trip made six decades ago.

"But this time it's different, I've been sent messages by many people and I have their support through tracking systems and wireless radio," he said.

Horie has accomplished many other remarkable things on the high seas.

25 years later, in 2008, he undertook a crossing of the Pacific aboard a boat made out of recycled material, which also relied on the driving force of the waves for propulsion.