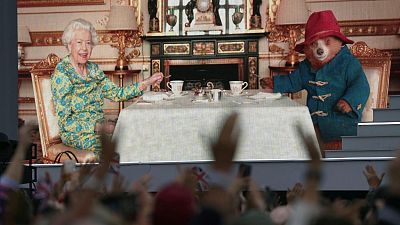 The crowd watch a film of Queen Elizabeth II having tea with Paddington Bear on a big screen at the Platinum Jubilee concert taking place in front of Buckingham Palace, London   -   Copyright  Victoria Jones/PA via AP
By Euronews  •  Updated: 05/06/2022

Now we know what is in Queen Elizabeth II’s handbag.

The long-time mystery was solved Saturday when the British monarch made the second star turn of her career, appearing in a mini-movie to kick off a concert celebrating her 70 years on the throne. The sketch featured the queen having a cream tea with British national treasure Paddington Bear at Buckingham Palace.

After drinking all the tea and destroying the cakes, the duffle-coat wearing bear from deepest Peru told Elizabeth how he always had a reserve supply of marmalade sandwiches with him, lifting up his red hat to reveal his favorite treat.

“So do I,” the queen responded before opening her bag and declaring: “I keep mine in here.”

The scene recalled the moment Elizabeth appeared as a Bond girl in a short film for the opening ceremony of the 2012 London Olympics.

“Her majesty is well known for her sense of humor, so it should be no surprise that she decided to take part in tonight’s sketch,’’ the palace said. “There was an interest in the filming and animation process and the opportunity to invite a famous bear to tea was just too much fun to miss."

The queen’s performance with an animated bear drew laughter and loud applause from the overflow crowd at the concert outside Buckingham Palace that was the highlight of the third of four days of festivities celebrating her Platinum Jubilee. The 96-year-old monarch did not attend the concert in person due to what the palace describes as “episodic mobility issues.”

World-famous musicians regaled an audience in London on Saturday as they paid tribute to Queen Elizabeth II at a star-studded concert outside Buckingham Palace celebrating the monarch's 70 years on the throne.

There were 22,000 people in the audience at the giant stage set in front of the palace, which also used the Queen's official London residence as a vast screen to project spectacular images of her reign, and graphics to accompany the musical acts.

There were performances to highlight the diversity of British talent from rap to pop music, dance and musical theatre.

A drone show above the crowd featured images of a teapot pouring tea into a cup, corgi dogs - the Queen's favourite - military guardsmen, horses and even a handbag.

Audiences were thrilled by the light shows, and big-name acts like Alicia Keys, Jax Jones, George Ezra and Elbow - who performed with a choir of refugees from more than 30 countries.

Britain's Sam Ryder gave an enthusiastic performance of his Eurovision hit song Space Man to the delight of the crowd; while Diana Ross closed out the show in her first UK performance in 15 years.

Serious messages during the festivities

Although the focus of Saturday night's concert celebrations was about the music there were also some serious messages.

Environmentalist and broadcaster - and British national treasure - Sir David Attenborough talked about biodiversity loss and the damage climate change is having on the planet, as stunning images of wildlife were projected onto Buckingham Palace.

Prince William gave a speech where he echoed his grandmother's words about hope for the future, as he praised his grandfather Prince Philip and his father Prince Charles for their environmental work.

"Mankind has benefitted from unimaginable technological developments and scientific breakthroughs. And although those breakthroughs have increased our awareness of the impact humans have on our world, our planet has become more fragile" over the last 70 years of the Queen's reign, William said.

Despite the queen’s absence, spirits were high during an event that culminated with appearances by the monarch’s son and grandson. Prince Charles and his son Prince William paid tribute to the queen in separate speeches that honored the past and looked to the future.

The queen has not attended any of the jubilee festivities since Thursday, when she waved to supporters from the balcony on Buckingham Palace.

The monarch also decided not to go to the Epsom Derby earlier Saturday, and was represented at the prestigious annual horse race by her daughter, Princess Anne.

The queen, known as a horse lover, has only missed the Epsom Derby a handful of times. On Saturday, five of her former racehorses were paraded, and 40 jockeys who have ridden for the queen formed a guard of honor before the national anthem was played.

“She’s been breeding horses for over 60 years,” Frankie Dettori, one of the jockeys, told the BBC. “She knows all the blood lines and she’s won lots of races and she’s very knowledgeable,”

“I’m sure today she’ll find a TV and she’s going to watch it live, because she loves the Derby so much,” he added.

It was the second time in as many days that the queen’s mobility issues have robbed crowds of a chance to see her.

On Friday, the queen skipped a special service of Thanksgiving in her honor at St. Paul’s Cathedral in London. Palace officials said she had experienced “some discomfort” at events the day before, which included waving to huge crowds from Buckingham Palace.