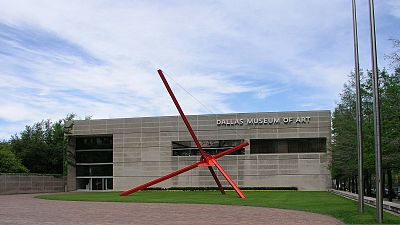 A 21-year-old man broke into the Dallas Museum of Art in Texas, United States, on Wednesday night (June 1) and smashed irreplaceable artworks, including three ancient Greek artefacts. The damages are estimated at more than $5 million (€4.7 million).

The man, identified as Brian Hernandez, forcibly entered the museum by shattering one of the windows with a metal chair at about 21:45 Wednesday, local time. He then went on to smash display cases and their millennia-old contents, according to police.

Hernandez was unarmed and justified himself by saying "he got mad at his girl so he broke in and started destroying property," according to local media NBC 5, quoting the arrest warrant.

The intent of the act was "not theft of art or any objects on view," confirmed a public statement from the museum.

A 6th century B.C. Greek amphora, 'Black-Figure Panel Amphora' and a Greek pot dating from 450 B.C, 'Red-Figure Pyxis 450 B.C' were both victims of the ramage. Those two items alone were valued at some $5 million.

Police said Hernandez used a stool to destroy two display cases where the objects were.

"The items inside of the display cases that were destroyed are rare ancient artefacts that are extremely precious and one of a kind," NBC 5 quoted police.

Hernandez has been charged with criminal mischief, which could cost him five years in prison.

The attack came just three days after a man disguised as an 'old woman' in a wheelchair threw cake at the Mona Lisa in the Louvre Museum in Paris. The attack did not damage Da Vinci's masterpiece and only left white cream smeared across its bulletproof glass.

Arguably the world's most famous painting, the Mona Lisa has been protected behind safety glass ever since it was damaged by a visitor who poured acid on it in the early 1950s.