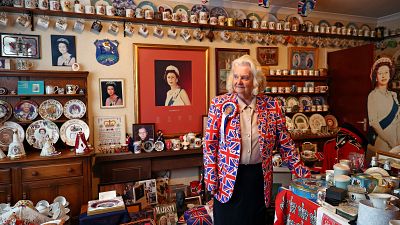 It takes agility to weave in and out of the thousands of frames and teacups bearing the image of the British royal family stored at the home of Margaret Tyler, one of the UK's biggest collectors of "royal" items.

To mark the Platinum Jubilee, which celebrates Queen Elizabeth II's 70-year reign, the 78-year-old retiree, wearing a Union Jack jacket, proudly displayed her enormous collection in her home in Wembley, northwest of London.

Five whole rooms of her semi-detached home are filled with memorabilia.

"It's wonderful that the Queen has spent 70 years on the throne. The only thing that saddens me is that Prince Philip is not here," she said.

Her home, named Heritage House, is guarded by two garden gnomes in the shape of the Queen.

Inside, Margaret has amassed over 12,000 objects related to the British royal family - from teacups and posters, to picture frames, books and statuettes.

"If I like it, I buy it," she says. So much so that her children now forbid her to go on the internet to avoid spending too much.

One room of the royal family fan's house is entirely dedicated to the late first wife of Prince Charles, Princess Diana.

The special room has a portrait of "Lady Di" painted on the ceiling. "It's been quite a job because you have your arm in the air all the time, you always have to rest," she says.

While she hunts for royal memorabilia, Margaret Tyler also doesn't miss an opportunity to meet the royal family.

When she was 19 years old, she left her home in Herefordshire, a rural region in the west of England, to move to London, in order to get closer to Buckingham Palace.

She has since met Queen Elizabeth II four times. "I gave her a bouquet of flowers and a cake in the shape of a crown," she recounts with unconcealed pride.

Margaret hopes that the jubilee celebrations will be a success for the queen.

"I wish her a happy time with her family (...) and a moment of respite because she works so hard," says Margaret.

Saddened that Harry, the monarch's grandson, and his wife Meghan have left the royal family and gone to live in the United States, Margaret is pleased that the couple will make the trip to London for the celebrations.