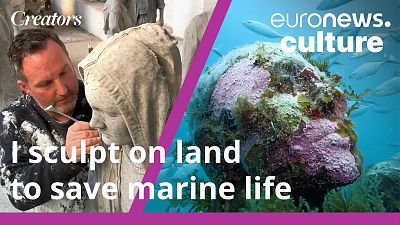 In 2006, Jason deCaires Taylor, a British sculptor, who was living in Grenada in the Caribbean at the time, witnessed a hurricane hit the island. The hurricane decimated large areas of the coral reef system.

Jason, who grew up in different parts of the world, but always in contact with the ocean, wants his art to be more than "just art". He wants it to have a secondary purpose.

The passage of the hurricane was a triggering event for him. He decided to create underwater sculptures that could be used as structures for the development of new corals and help the blooming of marine life, but also as a diversion for tourists and divers, providing respite for the affected areas.

I think it's a bit of a cliché to say we're living in unprecedented times. But the reality is we are and our oceans are dramatically changing.

Grenada is not the only place where coral is under threat. Around the world, various factors are putting it at risk, such as rising temperatures, increased acidification, overfishing and pollution.

And even though the messages from the scientific world are very clear on this, we are slow to react says Jason.

For Jason, who studied sculpture at art college, we understand the world through stories.

Art has the ability to tell stories, he adds, so artists play a critical role in combining the science into a message that is both emotional and makes you feel connected to the issue.

Another aspect that is very important to Jason is to make his art environmentally relevant to the location of his installation.

A large part of the work therefore takes place upstream, where Jason takes the time to meet with the local marine authorities and a team of biologists to define the ideal site.

The most important criteria are that the installation of the work should have no negative impact on existing marine life and that the materials will last underwater and will not pollute the environment in any way.

Jason also meets with local people to hear their stories and experiences to incorporate their voices into his work.

“I also like the artwork to connect to the community where they're placed,” he explains. “That's very important to understand the culture, where they're going to be installed and speak to people and hear their stories from the area.”

I also like the artwork to connect to the community where they're placed.

Local people also act as models for his sculptures.

To achieve this, Jason uses two different techniques, the first one involves casting people in plaster of Paris and the second, more modern, requires scanning them with a digital scanner.

From these initial impressions, moulds are created and replicated in a special type of marine cement. Then comes the time to sand, polish, grind and create nooks and crannies so that the marine life can settle on the sculpture.

Art that comes to life

Once the sculptures are made in his workshop, it is time to install them on the ocean floor.

It's mandatory to use a crane due to the heavy weight of the work which must resist hurricanes, cyclones and strong oceanic forces.

Once installed on the sea bed, Jason's art begins to come to life.

Each sculpture goes through many stages. A thin layer of algae begins to adhere to the marine cement of the piece. Invertebrates also come and colonise the surface. And finally, hard and soft corals and all the different types of marine life settle on and around the artwork and it just carries on evolving.

“I never actually feel like they're fully finished. They're just always in a series of processes”, says Jason.

Find out more about Jason’s ever-evolving underwater art in this episode of Creators, a series where we get inside some of the world's top creative minds. Watch the video in the media player above.

Is this Spain's most disruptive bartender?