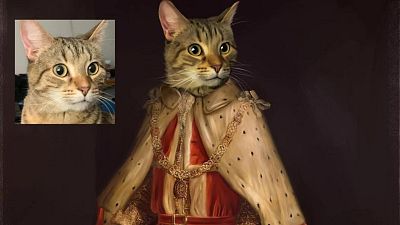 When a Reddit post was made to thank and support the Ukrainian artist, Ivan Kozak had no idea he was about to receive a deluge of requests for his iconic pet portraits.

As the world watches the horrors in Ukraine as the Russian invasion continues, it can be hard for people to imagine anything joyful happening in the country. But those people clearly haven’t seen Ivan’s artwork.

Lviv resident Ivan Kozak has been making drawings and paintings for a decade, selling his digital portraits on Etsy for the past few years. At first, he just did human portraits, before adding pets after a family loss.

“It’s a funny story actually. My mum’s dog passed away and she asked me to come over and paint a portrait of our dog. Her name was Lady, so I decided to make her look like a real lady,” Ivan says.

“That was my first drawing like that, and after I decided to list it on Etsy and it became really popular.”

Since that first dog portrait, the popularity of Ivan’s Etsy page has snowballed and now he has five other painters in a team with him working on projects.

It’s Ivan’s dream career after years working as a bartender, having never trained in art.

“I have loved to draw since my childhood,” he says. “I just started by watching videos on YouTube.”

After commissioning Ivan to make a portrait of their pet, one of his customers took to Reddit to tell others about how great his art was.

“I wanted to support a Ukrainian artist. I found someone in Lviv who does pet portraits. This just arrived. My husband will be getting this picture of our cat for Christmas,” user TeachOfTheYear wrote on the Ukraine subreddit.

The post had nearly 3,000 upvotes at time of writing, and the comments sections was filled with people desperate to get their own pets painted.

“I found out about the post the next day, as the customer wrote to me to say she’d posted it on Reddit,” Ivan says.

“I went and read all these comments. It was really great because I didn’t expect such kind feedback from all these people. It was a great feeling.”

After the post, Ivan and his team have had an influx of orders ensuring they will be able to carry on making their pet portraits.

Ivan was especially touched by the response from people who wanted to support him as an artist in Ukraine.

“I almost cried. Tears of happiness because it’s really great. All these people with all these good words, it’s amazing.”

Although Ivan is relatively safe from the war in the western city of Ukraine, the war isn’t completely absent from his life.

“On the western part we, in general, live calmly because we’ve had maybe only seven or 10 explosions,” he says, casually.

“It’s strange to be talking to you about explosions like it’s an ordinary thing. Last week I was at home and I heard the sound of a plane near me. I looked out the window and I saw two missiles. Strange.”

What’s next for Ivan? He has a patriotic mission for his next piece.

Patron is a Jack Russell Terrier who sniffs out landmines and also the mascot for the State Emergency Service of Ukraine. Patron has helped locate over 200 unexploded Russian bombs during the war and has been awarded the Medal for Dedicated Service.

“We want to draw him and then make a digital drawing that everyone could buy. Then all the money can be put to helping people who are the victims of this war in the eastern part of the country,” Ivan says.