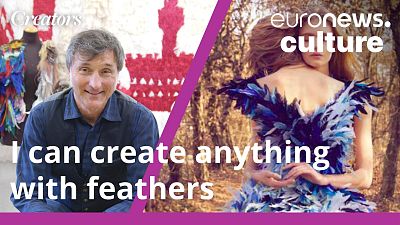 In Duccio Mazzanti’s workshop, feathers run the show. Colourful plumes of every size and shape imaginable adorn the walls, decorate mannequins, overflow from boxes and closets, even litter the floor.

This space, dubbed the “laboratory,” is where feathers are transformed into just about anything.

“Feathers can be placed anywhere,” Mazzanti says. “They can become shoes, bags, hats, belts, shawls, gloves, cuffs, necklaces, earrings, jewels. They can become anything you want.”

A third-generation feather maker, Mazzanti has spent decades learning how to master this material and turn it into unique wearable creations. He’s worked with world-class artists and performers, as well as some of the hottest designers in the fashion industry.

“Many designers and creators come to us because they want to know more about this material,” Mazzanti says. “So we provide a vast, immense inventory of models and shapes and colours and colour combinations so that people can understand their capability and amazingness.”

Feathers, Mazzanti says, are incredibly versatile. They can be cut into different shapes, dyed different colours, and contrary to how they look, they’re actually very resistant. This allows him to create a range of different looks – from light and airy to dark and intimidating.

“Just think of feathers as evolved hair,” Mazzanti says. “Just like we can comb and make our hair more punk or more romantic, we can do the same thing with feathers.”

A Modern Take on Tradition

Mazzanti Piume was founded in Florence in 1935 by Duccio’s grandmother Natalina, who began by making decorations for women’s hats from feathers and silk. Initially she sourced her feathers from people’s yards, plucking them from chickens, geese and turkeys that were then eaten for dinner.

Today, Mazzanti receives his feathers in bulk, but he says he’s made a point of keeping his supply chain sustainable by sourcing most of his feathers from poultry producers.

“All these feathers basically come from the recycling of the food market,” Mazzanti says. “So they are (part of the) circular economy, which uses the waste of another industry.”

Another way Mazzanti honours his family’s history is through the actual processing of the feathers. He favours using the small contraptions his grandfather built to bigger industrial machines, aiming to keep the process as human and natural as possible.

“My grandfather was a big help within this industry because he basically created all these funny tools that we see around here,” he says. “They are still used today after 60 years to make boas and other ornaments.”

As for the future of his craft, Mazzanti says he’s seen a strong interest from young designers who want to work with feathers. He believes they’re drawn to the material’s natural aspect, seeking to approach fashion in a more environmentally-friendly way without compromising on magic.

“Everything is magic with feathers. How do we reach the gods? We put wings on … Somehow feathers make us more important.”