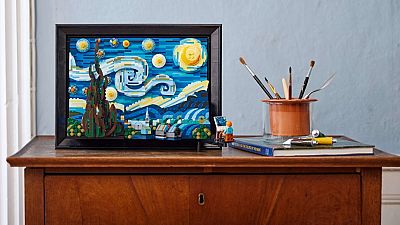 From the shining celestial bodies to the slumbering Provence village below, Vincent van Gogh’s mesmerising Starry Night is one of his best-recognised works all over the world.

In tribute to the Dutch painter’s 1889 impressionist masterpiece, and for fans unable to make the trip to New York to see it in person, the LEGO Group has unveiled a 2,316-brick tribute: The Starry Night Set.

Art lovers and AFOLs (that’s Adult Fans of Lego; you’re welcome) can get their hands on the homage from the first week of June.

The Starry Night project was the brainchild of Truman Cheng, a 25-year-old LEGO fanatic based in Hong Kong, and created in conjunction with the Museum of Modern Art (MoMA) in New York, where the painting has been housed since 1935.

Cheng, a PhD student, came up with the idea when he realised that stacking LEGO bricks together at random intervals made them look like Van Gogh’s iconic brush strokes.

“It was a good brain tease to come up with tricks and techniques to capture the look of the original painting,” he said of his design. “The brushwork goes into many directions in the moon and the swirling cloud, so there was some creative use of bracket and clip elements involved.”

Of course, no such LEGO set would be complete without a mini-figurine of Van Gogh himself, complete with paintbrush, palette, easel, and a mini version of the painting itself on a printed tile.

When dextrous fans are finished with their builds, the set, measuring 38x28x21cm, includes a frame that allows it to stand alone or be mounted on the wall. Might as well, given that it costs a cool €169.99 (in fairness, the real Starry Night is valued at some €95 million).

The Denmark-based toymaker is also inviting fans in Spain, the UK, Germany, France, Canada, Mexico and Poland to send in their own designs inspired by the night sky. The winners will be displayed in the lobby at MoMA this summer.

How are these Lego Rebels inspiring people to take climate action?