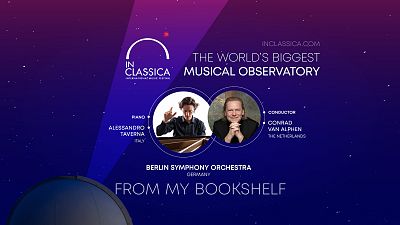 The Berlin Symphony Orchestra will play Alexey Shor's 'From My Bookshelf' on Friday, May 20.   -   Copyright  InClassica International Music Festival
By Euronews  •  Updated: 21/05/2022

The Berlin Symphony Orchestra is set to take to the stage at the InClassica international Music Festival with maestro Conrad Van Alphen as a conductor.

The orchestra, which is celebrating its 140-year anniversary in 2022, will open the concert with Antonin Dvořák’s vibrant piece Karneval Konzertouvertüre, Carnival Overture, written in 1891. This introduction, which lasts around 11 minutes, will surely make you want to listen on.

You can watch a live stream of the concert in this article from 20:00 CET on May 20.

Also on the programme is Alessandro Taverna; the virtuoso pianist who gained international recognition in prestigious international piano competitions such as the Piano-e-Competition in the US. The ensemble will perform “From My Bookshelf”, the Piano Concerto written by the Ukraine-born contemporary composer and mathematician, Alexey Shor.

Many of the works played in operas are by long-passed composers like Bach or Mozart. The InClassica festival chose Shor in order to offer the musicians the chance to interact directly with the composer who wrote the music they are playing.

Made up of eight movements, the concerto pays tribute to well-known characters from varying literary works such as Romeo and Juliet, Don Quixote, Tom Sawyer, Cinderella, d’Artagnan, King Matt the First, the Queen of Hearts, and Quasimodo.

Specially arranged by Mikhail Pletnev, the famous Russian composer who won the Gold Medal and the First Prize at the International Tchaikovsky Competition at the age of 19.

The InClassica international Music Festival features musicians known worldwide who have dedicated themselves to their passion. It attracts audiences whose love of classical music takes them to the four corners of the world.