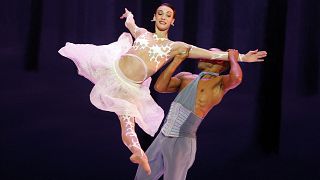 Olga Smirnova, a former star of the world-famous Bolshoi Ballet, took flight in mid-March after a decade with the Moscow institution. The departure of the 30-year-old prima ballerina caused uproar in the art world, and struck a political blow too.

Now dancing with the Dutch National Ballet in Amsterdam, Smirnova says she is worried about the isolation of performers and artists from Russia.

"For the Bolshoi, 20 years is nothing, but for a dancer, it's his whole life."

St. Petersburg-born Smirnova was one of the main faces of the company, described by one British newspaper as "the perfect physical instrument of her art form" exhibiting "stunning perfection".

Her ten years with the Bolshoi, she told AFP, were "wonderful ... I really felt part of the world. All that ended with the war."

Even at the height of the Cold War, ballet tours were seen as a bridge between the USSR and the West. But after the Russian invasion of Ukraine, its foreign tours were cancelled, its stars are no longer invited abroad and choreographers like Jean-Christophe Maillot and Alexei Ratmanski have disavowed the company.

Smirnova is not worried about the Bolshoi itself, "a huge institution that survives any crisis". But she fears a generation of Russian dancers will be cut off from the world at the peak of their careers.

She refuses to call her departure a "defection": a word used in the Soviet era when ballet legends like Rudolf Nureyev and Mikhail Barychnikov moved to the West.

When the invasion began, Smirnova said, she thought it would end quickly. But a few days later as reality hit, she wrote on Telegram: "I am against the war with all my soul ... I never thought I would be ashamed of Russia".

In March she travelled to Dubai to treat an injury, telling no one but her husband and the artistic director of the Dutch National Ballet, Ted Brandsen, that she did not intend to return home.

When the news broke, she said, her parents were shocked while friends have barely made contact: "I've only received a few messages. Maybe they don't understand my decision, or maybe they are protecting themselves from the truth, and saying to themselves: 'I am just a dancer, I have nothing to do with politics'. I think I was honest with myself and followed my conscience."

Smirnova danced in a new version of the ballet "Raymonda" in April. Performing in Amsterdam, she said, "I felt like I was getting my life back."