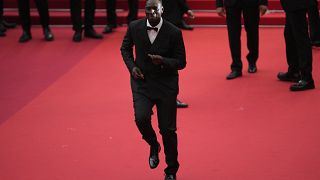 The story of a young Senegalese man captured in his village in 1917 to serve alongside the French in World War One has conquered the public on its opening night at the Cannes Film Festival.

The period drama, by first-time director Mathieu Vadepied is also known as 'Father and Soldier' and was shot using a hand-held camera.

It shows the horror of war for these men, and thousands of African fighters, who were torn from their native Africa to fight on the front line in a cold and unknown region, under the French uniform.

According to the festival's director Thierry Frémaux the film arrived late in the 'Une Certain Regard' category but "there are films like that which become obvious".

The "Un Certain Regard" selection presents 19 films, including for the first time at Cannes, a Pakistani feature.

Beyond the horror of war, the film puts the tormented relationship of a father and his son at the centre of the film. Diallo, who just wants to bring his boy home alive, and Thierno, who has been galvanized by military ambition.

This film also reminds us that, according to various sources, at least 30,000 African fighters died for France on the battlefields during the First World War.