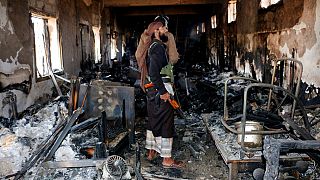 It is a celebration of the importance of museums in cultural exchange, enrichment, cooperation and peace among peoples, says the International Council of Museums.

Despite their immense importance, museums are not immune from the effects of war. Throughout history, these invaluable cultural sites and the heritage within them have been targeted and damaged - often permanently destroyed.

Yemen's Taiz National Museum—along with the majority of its precious contents—was destroyed in a fire caused by shelling in February 2016.

Houthi rebels and government fighters, who have waged a bloody civil war since 2014, both blamed each other for the blaze.

The museum housed 1,000-year-old manuscripts and copies of the Koran, alongside items belonging to the last Yemeni Imam, Ahmed Hamid Al-Deen, such as antique pistols and a turban.

The United Nations (UN) has reported that the eight-year conflict has caused significant damage to Yemen’s historic sites and monuments, including the ancient Ottoman-era al-Owrdhi complex outside of Sanaa’s old city.

In a statement released in June 2015, UNESCO Director-General Irina Bokova said she was “profoundly distressed” by the cultural destruction in Yemen.

“This destruction will only exacerbate the humanitarian situation and I reiterate my call to all parties to respect and protect cultural heritage in Yemen,” she said.

In 2015, the world watched in horror as fighters for the so-called Islamic State (IS) obliterated archaeological treasures at the Mosul Cultural Museum in Iraq with sledgehammers.

The destruction was part of the terror group's campaign to erase the country's pre-Islamic cultural heritage, which was later labelled as a war crime by the UN.

Some 25,000 items in the museum's library were burnt by IS and the buildings themselves suffered colossal damage, notably a 5.5-metre bomb crater in the floor.

Priceless historical artefacts were plundered by IS from the site and elsewhere in Iraq. These were later sold on, often in international black markets, earning the terror group an estimated $7 billion (€6.65 billion).

Following an effort by France to raise tens of millions of dollars from international donors, a consortium was formed in 2018 to try and bring the museum back to life.

It is yet to reopen.

The Palmyra Museum, founded in 1961, was partially destroyed after it was hit by Russian and Syrian airstrikes in 2015. As in Iraq, IS fighters finished off the rest, smashing and looting its contents.

The museum contained 12,000 artefacts, including ancient mummies and statues.

Although the number and nature of the looted antiques remain unknown, a report by the Gerda Henkel Foundation and the Paris-based Syrian Society for the Protection of Antiquities found that 3,450 artefacts were looted from the museum.

In total, 29 museums and places of worship have been damaged since the outbreak of the Syrian Civil War in 2011. According to the report, each suffered vandalism, looting, bombing and destruction to some degree.

Serhiy Shumylo, a researcher at the Institute of History of Ukraine in Kyiv condemned the “purposeful and systematic destruction" of Ukrainian heritage by Russian forces, citing their heavy bombardment of the 1,300-year-old city of Chernihiv - which predates Moscow.

The Chernihiv Regional History Museum is just one culturally important location affected by the 2022 war, four museums, 29 religious sites, 16 historic buildings and four monuments have been badly damaged or destroyed since Russia invaded Ukraine in February, according to UNESCO.

Fortunately, however, many pieces have been saved thanks to the actions of Ukrainian museum staff, who have raced to move art and displays to safety.

“It is simply irony of fate that we should be saving Russian artists, paintings by Russian artists from their own nation. This is simply barbarism,” Maryna Filatova, head of the foreign art department at the Kharkiv Art Museum, told Reuters in March.